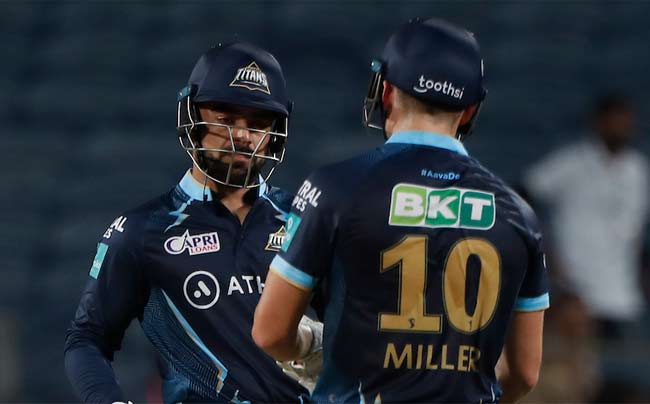 David Miller helped Gujarat Titans snatch a victory out of thin air against the Chennai Super Kings. He just missed a hundred, but his innings of 94 from 51 balls at 184.5 is up there as one of the finest IPL finishes of all time. GT reached their 170-run target with three wickets in hand, and just one ball to spare, while Miller lit up the ground with eight fours and six sixes.

GT were in a soup after they lost their first three wickets inside the Powerplay, and at the end of the fourth over were 16 for 3. Rashid Khan he hit 40 runs from 21 balls, his highest IPL scorera. Maheesh Theekshana and Mukesh Choudhury ripped through the Titans’ top-order, and two batters – Shubman Gill and Abhinav Manohar – were dismissed for ducks. Wriddhiman Saha was dismissed just after the Powerplay by Jadeja after adding 10 from 18.

Rahul Tewatia joined Miller when GT were struggling at 48 for four, but his stay was short lived as well, contributing 6 for 14 before Bravo sent him on his way. Enter Rashid Khan. The Aghan was standing in for his captain Hardik Pandya today, and did he stand up and deliver.

David Miller rescues Gujarat Titans after they were 48-4

The two put on a partnership of 70 runs off 37 balls that took the game away from CSK. Miller kept the scoreboard moving almost single-handedly, until Rashid joined the party. He hit three sixes and a four off Chris Jordan in the 18th over, and 25 runs came off those six balls. At the end of it, GT were favourites to win with 25 needed off 12.

Dwayne Bravo tried his best to salvage the situation, and picked up the wickets of Rashid and Alzarri Joseph in successive balls off the penultimate over, but it left Miller on strike for the last over with 14 runs needed. He hit a six and a four, and scrambled for two runs off the second last ball to take his side home.

Twitter was overflowing with praise for the South African’s tremendous innings.

What a match. IPL has come alive with this close encounter. Congratulations to Rashid on debut as a captain, and Miller sent the ball all over the park.#CSKvsGT

Un-be-lievable game. Outstanding knock from David Miller, elevated by the absence of the skipper – GT skewed, weakened, imbalanced, on the ropes in the game itself needing 15rpo. Immense from Rashid to take CJ apart.

Cheesy as hell but there's nothing like a great comeback chase

Miller Miller Miller, where did that come from! Match after match Gujarat players are delivering the performance of a lifetime to carry their team with no support. This is a whole different brand of T20

This knock from Miller took me back to that sad old 2013 defeat to kxip. What a mighty mad knock that was.

The respect for David Miller's knock even more increases when you see he came at 16/3 in 4 overs chasing 170 and was just left with Rashid Khan after 12 overs. Other might look to avoid a bowl out, but Miller was positive with his attitude throughout. Mad knock!

The most incredible cameo seen this @IPL – @rashidkhan_19. And Killer Miller @DavidMillerSA12 has made the last over look so easy #GTvsCSK

Chasing 170 with this handicapped batting line-up wasn't easy at all. David Miller deserves all the appreciation. pic.twitter.com/joXzDMWsyp

This defeat will hurt CSK long. Without Pandya Titans below full strength but beat the odds. CSK had match in control till Miller & Rashid partnership flattened them. Poor bowing by Jordan, but credit to the batsmen for self belief & derring do. Rashid’s was an outrageous knock