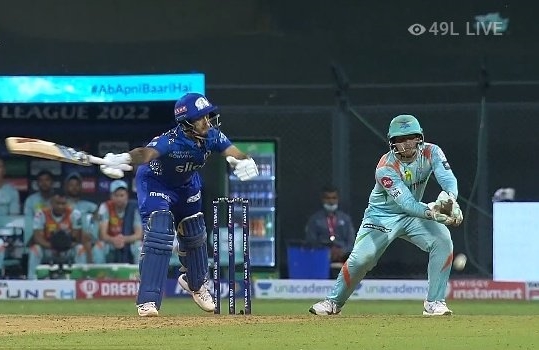 The Mumbai Indians have still found no respite this IPL. After a 36-run defeat to the Lucknow Super Giants at Wankhede Stadium, their first game there in nearly three years, MI have acquired the unwanted record of becoming the only team to lose the first eight matches of an IPL season.

Luck seemed to be going MI’s way for the first half of the game. The won the toss and opted to chase, and managed to restrict LSG to 168. At least, they managed to restrict most of LSG; KL Rahul proved to be unstoppable, picking up from where he left off in his previous hundred against MI from one week ago. Aside from Rahul, who scored 103 off 62 balls, the rest of the batters contributed 57 off 58. Though Daniel Sams and Riley Meredith were expensive, their three wickets between them costing 80 runs, Kieron Pollard‘s 2-8 and Jasprit Bumrah’s 1-31 was the pick of the bowing.

Rohit Sharma seemed determined to chase down the 168, even if he had to do it himself, and his batting mirrored his intentions. He struck five fours and a six during his 30-ball stay at the crease, scoring 39 runs at a strikerate of 125. Thanks to Rohit’s attack, MI managed to add 49 for the first wicket by the end of the seventh over.

But his fellow opener Ishan Kishan looked wretched; he faced 20 balls and scored just nine runs off them, which included zero boundaries or sixes. After Ishan fell after the powerplay, Dewald Brevis and Rohit followed suit in successive overs. After being 49 without loss, MI were suddenly reeling at 58 for three.

Suryakumar Yadav finally proved that he is only human after being dismissed for 7 by Ayush Badoni, his first score below thirty since joining MI this season. 19-year-old Tilak Varma and 34-year-old Kieron Pollard found each other at the crease after Surya’s wicket, and added 57 (39) runs between them. Except that that partnership was a study of contrasts; while teenage Varma contributed 34 off 22 striking at 155, Pollard managed 17 off 17 balls.

Tilak’s wicket at the end of the 18th over sounded the death knell for MI, and the oncoming of an eighth successive defeat. After he was dismissed by Jason Holder, MI needed 44 off the last two overs. Pollard fumbled around for the strike, but faced only two more balls before he was sent back by Krunal Pandya at the start of the 20th over. Jaydev Unadkat was run out a ball later, and Daniel Sams holed out as well.

Mumbai could muster only 34 runs off the final five overs, while they lost four wickets in a heap at the death.

Mumbai Indians is the prime example of how you shouldn't invest all your money in one or two stocks. Invested all in Jofra Archer and Ishan Kishan and became first team to get out of IPL. Stay diversified even if you're Ambani.

What a great downfall from Champions to paupers @mipaltan. Please impose a self ban upon yourselves for the rest of the matches. Its painful to watch this.

Now I can say that :
LSG and his Captain both owns Mumbai Indians officially.

Why is the media, which mocked Virat's captaincy, now mute on Rohit's failure to lead MI to the play-offs for 2 years in a row? The truth is that not everyone is MSD who can win a match with any given Player. When it comes to captaincy, both Virat and Rohit are on the same level.

‘Painful to see him struggle against bowlers he feasted on’ – Twitter’s take on Kieron Pollard’s poor form
‘Is Shikhar Dhawan the most underrated IPL batter?’ – Twitter applauds PBKS opener’s half-century