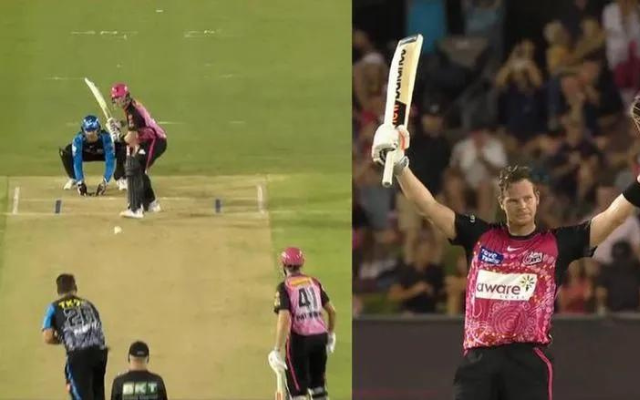 Just a day ago, Australia’s best batsman, Steve Smith opened up on the prospect of opening in the T20s. In an interview with Australian Associated Press, the veteran cricketer revealed that opening the batting is his favourite position in the shortest format.

It seems that he is starting to enjoy opening the innings in T20s. Recently, he scored a century against Adelaide Strikers in the 45th match of the Big Bash League at International Sports Stadium, Coffs Harbour.

The experienced campaigner scored 101 off just 56 balls where he constructed his innings with the help of 5 boundaries and 7 sixes to his name. Moreover, the right-handed batsman has maintained an exceptional strike rate of 180.36.

He was batting so well and was expected to add more value to the team’s total. However, he was run out by the combined efforts of Matthew Short and Alex Carey. Steve Smith ended up on the winning side as his team Sydney Sixers won the game by 59 runs.

Meanwhile, Steve Smith once again showcased his mettle by scoring a quickfire century against Sydney Thunder in the ongoing Sydney Derby at Sydney Cricket Ground, Sydney. Coming out to bat as an opener for Sydney Sixers, Steve Smith let his bat do the talking by scoring runs at the rate of knots.

The experienced cricketer dictated terms throughout the innings as he remained unbeaten on 125 off 66 balls, which was also his second consecutive century in the Big Bash League. The 33-year-old paced his innings with the help of five boundaries and nine sixes to his name at a sensational batting strike rate of 189.39.

Sydney Sixers’ captain Moises Henriques scored 45 off 36 including 1 four and 2 sixes. In the end, the team posted 187 for the loss of two wickets in their designated quota of 20 overs.

Has done enough to get selected as a replacement in IPL.

Smith trying to be SKY