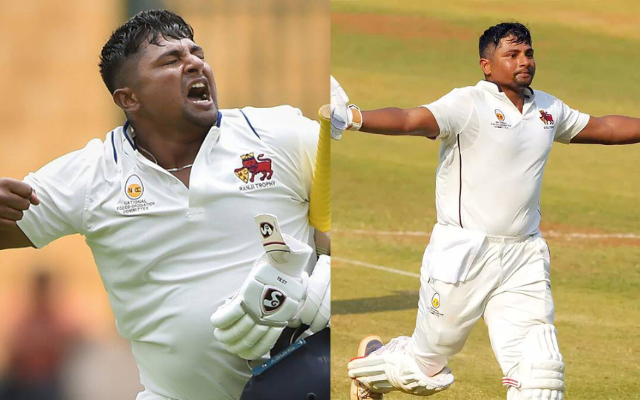 Mumbai cricketer Sarfaraz Khan hogged the limelight after he scored an impeccable century against Railways in the ongoing Vijay Hazare Trophy 2022 at JSCA Oval Ground, Ranchi.

The right-handed batsman showcased his true potential in the run-chase with a surreal knock that helped the team beat Railways by five wickets. Sarfaraz Khan drew plaudits for his batting show as he let the bat do the talking when it mattered the most.

Batting first, Railways posted a humongous total of 337 for the loss of 5 wickets in their quota of 50 overs. Pratham Singh scored an unbeaten 109 off 108 balls with the help of eight boundaries and six sixes at a strike-rate of 100.93.

Mohammad Asif also contributed to the team pretty well by scoring 92 off 77 balls including seven fours and four overs.

In reply to Railways’ target, Mumbai got off to a sloppy start as they lost Yashasvi Jaiswal for just 4 runs. However, Prithvi Shaw continued his good touch with the bat by scoring 51 off 47 balls where he struck as many as eight boundaries.

Skipper Ajinkya Rahane looked really good for his 88 off 82 balls where he hit nine boundaries and three sixes to his name. However, it was Sarfaraz Khan who stole the show altogether by scoring a 117 off 94 balls including 10 fours and 5 sixes.

His impeccable century helped Mumbai get the better of Railways by 5 wickets as they chased down the target in 48.3 overs. Currently, Mumbai cricket team are second on the Group E points table with 4 wins and 2 defeats, collecting 16 points.

Wazan kam karle thoda ,abhi pata nahi chalega but say what you like it is very important for prolonging career https://t.co/5D4LUykJwq

he could score 500 and not get a call up im convinced https://t.co/92iI9fPwhh

“IPL is helping everyone except Indians”, Twitter reacts after Joe Root said he has no expectations on salary and just wants to experience IPL
“Golden Boy! Ladies and Gentleman”, Twitter reacts as Gavi becomes the youngest goalscorer in Spain history at World Cup