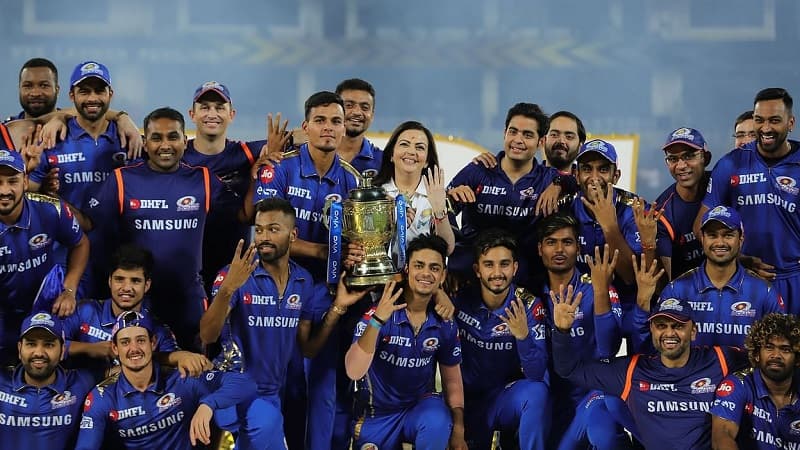 Mumbai Indians is a popular team that features in the annual IPL tournament. It was established in the year 2008. The team is based in the city of Mumbai, Maharashtra. Check MI Players Salary 2021, Highest-Paid Players.

The team squad is so strong that each player excels in its form. So, the brand value of Mumbai Indians, in 2019, is estimated to be around ₹809 crores. Therefore, making the highest amongst other franchise teams of IPL.

Mumbai Indians or MI is owned by India’s biggest conglomerate industry, Reliance Industries. In 2008, the Mumbai franchise was sold to Reliance Industries Ltd for $111.9 million, making it the most expensive team to be sold in the league. So take a look at the Salary Of Mumbai Indians Players In 2021, Who Are The Highest-Paid Players In The MI Team.

MI consists of many skilled and outstanding players. The sole reason why it is considered as the most expensive team bought. The Players like Rohit Sharma, Hardik Pandeya, Kieron Pollard who are all-rounders, give a tough time to their opponents.

So take a look at the list below, where the name of the players, roles, and the salary of each in IPL is mentioned.

Who is the Highest paid Players In The MI Team?

The most paid player in Mumbai Indians is Rohit Gurunath Sharma. He is the captain of the team. With an earning capacity of 15 Crores of rupees, the player becomes the highest-paid player in the MI team. the 30 years old, tall jock has a total of 2,831 runs scored in his cricketing career.

The second most highly paid cricketer is Hardik Pandya. He whops a salary of ₹11 crores (US$1.5 million). He has a unique style and is referred to as kung fu Pandya by his teammates.

The team has played its home matches in the 33,108-capacity Wankhede Stadium in Mumbai. Mumbai Indians won the 2011 Champions League Twenty20 after beating Royal Challengers Bangalore by 31 runs in the final. The team also won its first IPL title, in 2013, by defeating Chennai Super Kings by 23 runs in the final.