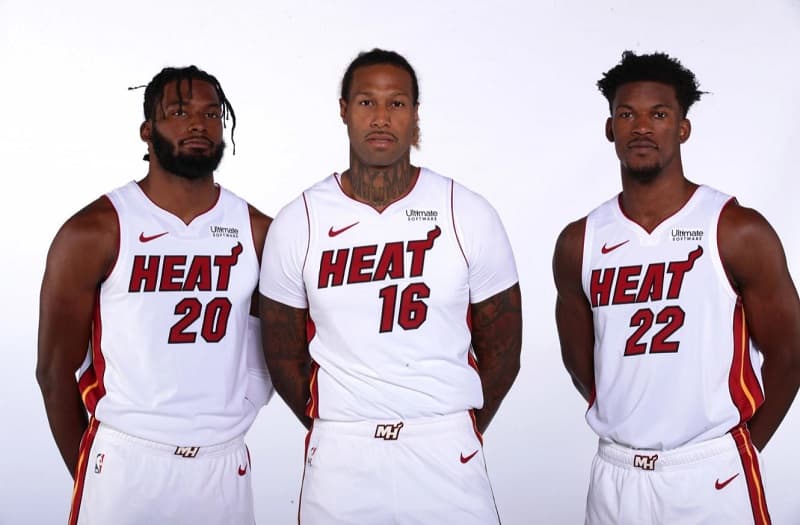 NBA is a North American professional Basketball League Founded in New York City on June 6, 1946. 30 Teams participate in this league of which 29 teams are from the USA and 1 from Canada. Check Miami Heat Players Salaries 2021/22, Highest-Paid Player.

The regular season of the NBA runs from October to April with each team playing 82 games. Milwaukee Bucks are the current Champions of the NBA. The Los Angeles Lakers and The Boston Celtics are the most successful NBA Franchises.

The Miami Heat is an American Professional Basketball Team that is based in Miami and competes in the Eastern Conference Southeast Division. Heats started playing in the NBA in November 1988 and they have been crowned as the Champions Thrice. In 2006, they won their first title. Heats play their home games in the FTX arena and they hold the record for the third-longest winning streak with 27 straight wins during 2012-13 season.

NBA players are the highest-paid athletes in terms of Average annual salary. The team manages to pay such hefty amounts to their stars by earning revenue through merchandise sales, advertisement, etc. Let’s have a look at the pay scale of the Heats players.

Jimmy Butler III is an American Professional Basketball player who currently plays for Miami Heats. He was born on 14 September 1989. In the 2011 NBA Draft, he was the 30th Overall pick by the Chicago Bulls and was nicknamed Jimmy Bucket. He is a 5 time NBA All-Star, a 4 time NBA All-Team and a 5 time NBA All-Defensive Team. He was NBA’s Most Improved Player in 2015. Butler was signed with the Heats via a sign-and-trade with the 76ers on July 6, 2019. His current salary is $36,016,200.

Kyle Terrell Lowry is an American Professional Basketball player who was born on 25 March 1986. He currently plays for The Miami Heats. Lowry has been a six-time NBA All-Star and in 2016, he was named to the All-NBA third team. He was a part of the US basketball squad that won Gold in the 2016 Olympics. He was the 24th Overall pick in the 2006 NBA Draft by Memphis Grizzlies. On August 6, 2021, Lowry joined the Heats. His current salary is $26,894,128.

Duncan McBryde Robinson is an American Professional Basketball player who currently plays for Miami Heat. He was born on April 22, 1994. He is an undrafted player and on August 6, 2021, he signed a five-year $90 million deal to stay in the Heat awarding him the richest contract for an Undrafted Player. His current salary is $15,650,000

Anthony Leon “P. J.” Tucker Jr. is an American Professional Basketball player who currently plays for Miami Heat. He was born on May 5, 1985, and won a championship with the Milwaukee Bucks in 2021. Tucker was signed with the Heats on August 7, 2021. His current salary is $7,000,000.