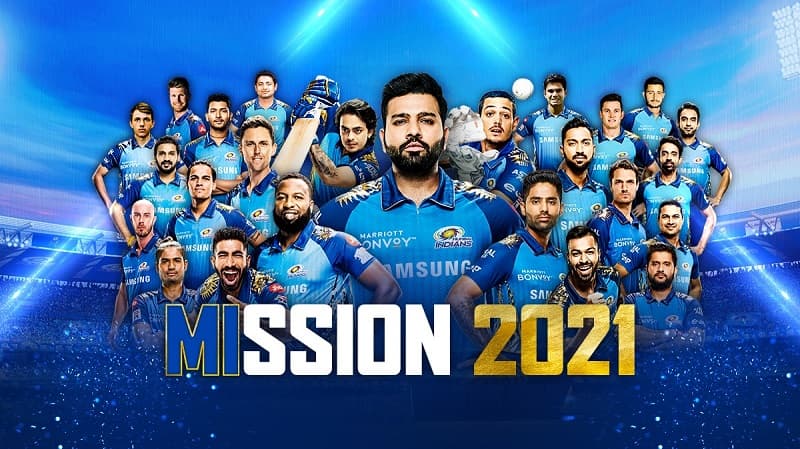 Mumbai Indians is the most successful franchise of the Indian Premier League. The team is led under the captaincy of Rohit Sharma, an excellent batsman. Check Mumbai Indians Players List 2021, Owner, Captain, Stadium, And Fixtures.

The team has crossed the mark of $100 million in the year 2017, making it the highest brand value amongst other franchises of IPL. IPL fans had been eagerly waiting for its comeback. Also, MI has made some quick fixes in their team squad.

Mumbai Indians currently stand 4th in the ranking. The team was the first one to fly to UAE and was quarantined as per the protocols. They are at The St. Regis Saadiyat Island Resort in Abu Dhabi before beginning their camp. After undergoing the mandatory quarantine, the players started their training at RCP. So check out the Mumbai Indians 2021 Squad, Complete Players List, Owner, Captain, Stadium, And Fixtures.

Mumbai Indians are the defending champions of the IPL. Players like, Piyush Chawla, James Neesham, Marco Jansen, Yudhvir Charak, Nathan Coulter-Nile, Adam Milne, Arjun Tendulkar have been added to the team. This means this year MI is set again to win the trophy for the third time in a row.

Here is the entire list of players that will be performing in the upcoming league at UAE 2021.

Who is the Owner and the Captain of Mumbai Indian 2021?

The team is coached by Mahela Jayawardene.

What is the Fixture for the team Mumbai Indians 2021 ? Stadium Details

The team plays all its home matches at Wankhede Stadium, Mumbai which has a capacity of 33,000. However, the team also practices at another stadium, Brabourne Stadium, Mumbai.

Check out the Mumbai Indians Highlights 2021

With such players in the team, it is going to be a thrilling season for the fans to watch. MI has decided to put on their best forms and sweep the trophy again this year.