‘Never write off CSK, they know what it takes to be champions’ – CSK fans express joy & relief over first win 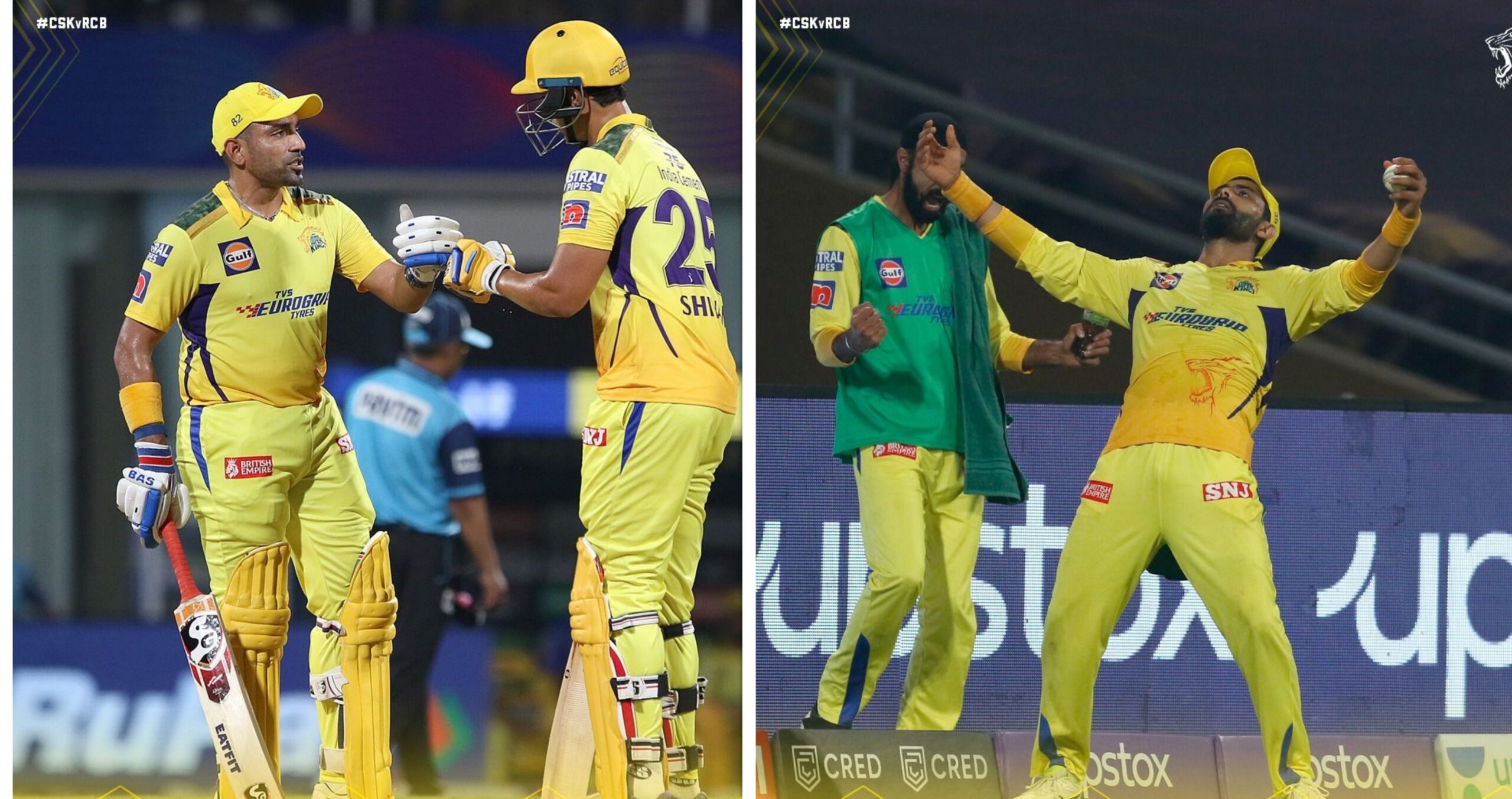 Chennai Super Kings will be relieved to finally claim two points. CSK have secured a win in their fifth attempt so far in their clash against RCB on Tuesday (Aprill 11), defeating the opposition by 23 runs after setting them a 216-run target.

RCB showed terrific intent to get as far as they did. After they were reduced to 50-4 within seven overs, Suyash Prabhudessai and Shahbaz Ahmed put together a scrappy 60-run partnership for the fifth wicket that kept RCB’s hopes alive. Both fell between overs 13-15, and Jadeja removed Hasaranga de Silva and Akash Deep in the 17th over. Ambati Rayudu took a stunner to remove Hasaranga, diving low to pluck the ball out of the air with three fingers. Dinesh Karthik continued to bat on regardless, however, and at the start of the 17th over RCB needed 71 runs from 24 balls, difficult but well within the realm of possibility for the unreal form of Karthik.

Karthik had been dropped on 6 by Mukesh, who was having a frightful day in the field, and looked like he was going to make CSK for it.
The game was truly on. But in the end it was CSK who triumphed; their trusted workhorse Bravo removed Karthik in the 18th over, and Jadeja took an outstanding catch at the very edge of boundary rope, collapsing with relief with the game finally in the bag. Though CSK would’ve liked a better margin of victory, they were elated at finally managing their first victory.

Before this match, the last time CSK had won a game was on October 15 against KKR, whom they defeated to secure their fourth IPL title. It was a long wait for the next, with four tough losses and 25 IPL matches in total occuring between them. CSK have always the advantage over their Southern Derby rivals, with 18 wins over them from 27 head-to-head. But going in to the game, RCB were clearly the form team, favoured to win with three wins from their four games opposed to the opposition’s four straight defeats.

CSK began their innings sluggishly after being sent in to bat, panting along for their 35 powerplay runs. Opener Ruturaj Gaikwad hit three boundaries and finally looked to be recovering some of his touch, but fell lbw for 17(16) to former CSK teammate Josh Hazlewood. Moeen Ali was the victim of a careless run-out in the seventh over. At the end of the tenth over, CSK were at a familiar 60 for 2, with Shivam Dube and Robin Uthappa at the crease. They looked on course to set a target of 160-165.

Then the Dube attack began, and Uthappa joined in not long after. The two added a record 165-run partnership off 74 balls, the highest third-wicket partnership in the history of IPL, as well as CSK’s second highest partnership of all time, only behind the Watson-Faf 181 against Punjab in 2020. Both Uthappa and Dube played career-best IPL knocks, Uthappa adding 88 off 49 and Dube narrowly missing his hundred but still scoring 95 off 46, the duo striking at 176 and 206 respectively. CSK plundered 156 runs from the second half of their innings.

Aside from some dropped catches, CSK did practically everything right with the ball. RCB’s powerplay was even worse than CSK’s with them losing their top three batters for only 42 runs. Maheesh Theekshana took the bittersweet wicket of Faf du Plessis, and the former CSK star had to return for 8(9). Two overs later Mukesh Choudhary picked the prize wicket of Virat Kohli, who had to return for 1, and Anuj Rawat was dismissed lbw for 12 in Theekshana’s next over. Jadeja, who’d been dismissed for a first-ball duck in CSK’s innings (unfortunately the second time this season), more than redeemed himself by removing Glenn Maxwell’s legstump, sending the dangerous Australian packing for 26(11).

Tonight @ChennaiIPL looked like the champions they are! Top batting and brilliant bowling by Theekshana and captain @imjadeja Great win to open the points account. Congratulations, guys 👏 👏 👏 #CSKvRCB #IPL2022

CSK at its lowest is still better than RCB at its highest. We totally own them .

Teams and players are temporary. Yearly RCB dhulai by CSK is permanent

This win feels so so good. In some way I'm happy we lost to SRH and got the first win against RCB. Satisfying 😂

Happiness for a while doesn't depend on Mumbai Indians. I missed this feeling.

What a time for the men in yellow to come back into form! Brillaint knock by @robbieuthappa and #Dube both of you deserved a 100, one of the best hitting i have witnessed !Never write of these champs they know what it takes to be Champs! Bleeding yellow @ChennaiIPL #CSKvsRCB