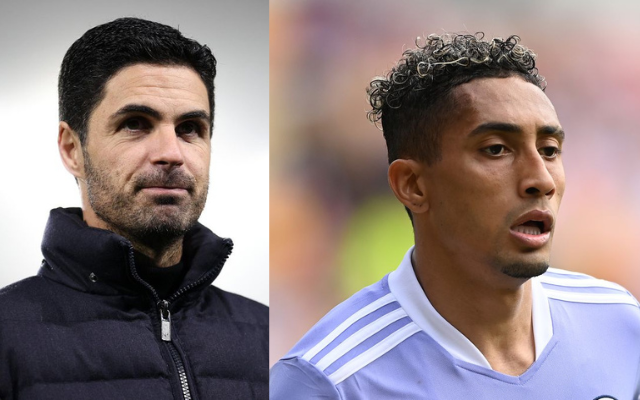 It has been claimed that Arsenal has made a preliminary bid for the winger Raphinha, who now plays for Leeds United and is also of interest to both Barcelona and Chelsea

The Athletic reports that Arsenal has made a bid to Leeds United to acquire Brazilian winger Raphinha. According to The Athletic, Barcelona, and Chelsea are also interested in signing Raphinha. However, the offer from the north London titans falls short of the price that Leeds has placed on the club, and the Yorkshire club is expected to immediately reject it.

The Brazilian player joined Leeds United in 2020 after previously playing for Rennes in France and quickly established himself as a fan favorite at Elland Road. Since the Whites’ promotion back to the Premier League, he has been a key contributor to the team’s success in defending its Premier League standing in each of those seasons. In his 35 league appearances during the 2021–202 season, Raphinha was quite fruitful, as he scored 11 goals and assisted on three more throughout the course of the year.

This summer, Raphinha has been the subject of much speculation because some of the best teams in England and Spain are competing with one another to acquire the services of the 25-year-old player. The Catalan club Barcelona has expressed the greatest interest in acquiring Raphinha, while the English clubs Arsenal and Chelsea have also indicated an interest in the winger who once played for Sporting CP. According to The Athletic, Arsenal has made a bid for the 25-year-old superstar to capture him before Barcelona does.

The newest members of the Arsenal squad are Matt Turner, Marquinhos, and Fabio Vieira, and the club has gotten off to a strong start this summer by acquiring their services. Raphinha has emerged as the primary goal of Mikel Arteta’s pursuits to bring in a new wide player to fill the void left by Nicolas Pepe and increase the level of competition for the promising youngster Bukayo Saka.

Earlier in the week, it was reported that Arsenal had gained the upper hand in their pursuit of Raphinha, surpassing Barcelona in the standings. They have followed through on the interest that was reported in them by making a bid to purchase the winger. However, according to The Athletic, the north London club’s offer is far lower than what Leeds values its star attacker to be worth, and the club is likely to reject it, opening the door for the competition from Chelsea and Barcelona.

As was said previously, Barcelona has been mentioned rather often in connection with a potential transfer for Raphinha. It is believed that the 25-year-old would like to transfer to Camp Nou, where the La Liga powerhouses have already reached an agreement on personal terms. The financial condition of the Blaugrana, on the other hand, has made their pursuit of the 25-year-old more difficult. However, Barcelona is getting ready to pull its “economic levers,” which means that they might make an offer for Raphinha at any moment.

What’s next for Raphinha?

Raphinha is attracting interest from Chelsea, who are also looking to overhaul their assault and may use his services. There is a spot open for a new winger on Thomas Tuchel’s roster even though key players like Hakim Ziyech, Timo Werner, and Christian Pulisic are facing an uncertain future. Ousmane Dembele, who is unhappy with his contract at Barcelona, has been linked with a departure. However, the Blues are having second thoughts about the transfer and are considering bringing in Raphinha as a possible replacement.

The article indicates that Barcelona will continue to serve as Raphinha’s primary focus. But if a transfer to Camp Nou does not go through, he would rather join Chelsea to play in the Champions League. Arsenal is now ranked third on the Brazilian’s list of priorities, while their rivals at Tottenham Hotspur are at the very bottom of the pile. It is now unknown if Barcelona will be able to raise the necessary funds to acquire him or whether Arsenal will make a more competitive counteroffer.