‘No 19th over today, Bhuvi is the happiest person right now’-Twitter reacts as India vs Australia 2nd T20I will be of 8 overs per side 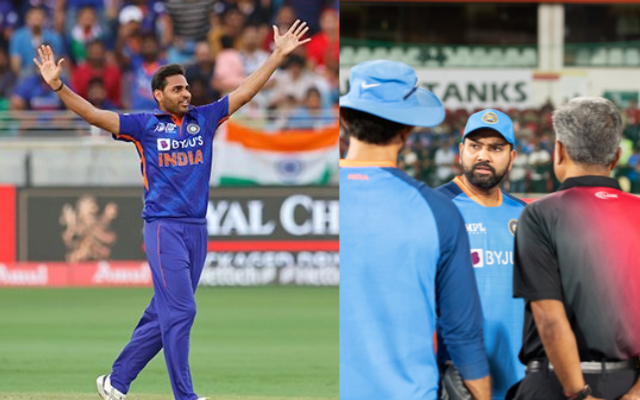 The second Twenty20 international between India and Australia will now only consist of eight overs for each team, and the toss will take place at 9:15 PM. The first ball will be bowled at 9:30 p.m. Before deciding to give the match the go-ahead, the referees and umpires each completed three inspections. The coin toss had to be postponed earlier because of the damp outfield.

After suffering a loss in the opening match of the series in Mohali, India is looking to get back on track. The death bowling has been India’s Achilles heel, as seen by their inability to defend a total of 208 runs in the first game of the series. The performance of Bhuvneshwar Kumar, in particular, has been the subject of much controversy. Both in the first Twenty20 international and the Asia Cup, the great bowler was completely outplayed by his opponent.

It would be intriguing to watch whether Bumrah makes his comeback, and if he does, it will also be interesting to see who will make room for the great pacer if he does return. The series is now 1-0 in favor of Australia, and it seems expected that they will keep the same playing XI.

The ‘three-and-a-half’ pronged pace attack, which included Hardik Pandya, let up 150 runs in 14 overs, which added to the team’s growing list of concerns.

The seasoned veteran, Bhuvneshwar Kumar, has already been brought to the cleaners by his opponents. In the three last penultimate overs (19th), which he bowled against Pakistan, Sri Lanka, and Australia, he allowed a total of 49 runs to be scored against his team.

In light of this, it is imperative for India that Bumrah be in the top physical condition and possess a fiery demeanor.

No 19th Over Today ..
Bhuvi is the happiest person rn …🥳#INDvsAUS

So basically chase and win the game

No 19th over. Bhuvneshwar is the happiest person right now.

‘He will hit that one six and get back to the pavillion’-Twitter reacts as Rohit Sharma needs just one six to surpass Martin Guptill to become the leading six hitter in the history of T20is
‘Justice for Bhuvneshwar Kumar; Bumrah playing means advantage India’-Twitter reacts as Jasprit Bumrah and Rishabh Pant replace Bhuvneshwar Kumar and Umesh Yadav