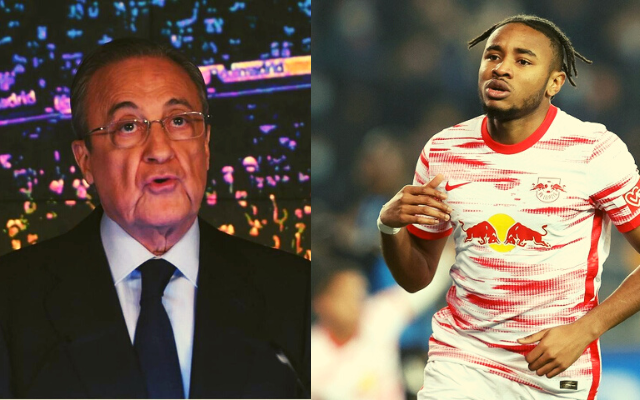 Tomas Gonzalez-Martin, a journalist for El Debate, said that Real Madrid would not be seeking the acquisition of RB Leipzig star Christopher Nkunku this summer but that they may pursue him again in 2023. Nkunku now plays for RB Leipzig.

Nkunku had his most productive season in 2021/22 when he scored 35 goals and set up 19 more in 50 appearances across all competitions. This performance helped Leipzig finish fourth in the Bundesliga and win the DFB-Pokal. Nkunku’s efforts contributed to Leipzig’s success. As a result onkuf his performance over the last year, the 24-year-old Nkunku was given his first breakthrough with the French national team in March. Since then, Nkunku has appeared six times for Les Bleus.

Nkunku, who is under contract to play for RB Leipzig until 2024, is drawing a lot of attention from a wide variety of teams around Europe. There has been speculation that clubs like Arsenal, Liverpool, Manchester United, and Paris Saint-Germain are interested in signing the player.

Real Madrid is said to be interested in Nkunku owing to his flexibility, which would allow him to either play in the middle instead of Luka Modric or play up top as cover for Karim Benzema. According to the report, Real Madrid, who are currently holding the titles of Spanish and European champions, have completed all of their transfer business for the summer and are thus not expected to pursue Nkunku.

Real Madrid has strengthened its roster by bringing in two new players so far. First, they acquired Antonio Rudiger from Chelsea in a Bosman transfer. Next, they splashed out almost one hundred million euros to get Aurelien Tchouameni from AS Monaco. In addition to that, Los Blancos have added another year to Luka Modric’s contract, which ensures that their midfield department will be in good shape for the forthcoming season.

What will Los Blancos do?

In addition to this, they want to depend on either Borja Mayoral, Luka Jovic, or Mariano Diaz as the backup for Karim Benzema, while Castilla striker Juanmi Latasa may be handed a more important position in the first-team setup. Real Madrid has made the decision not to pursue Nkunku as a consequence of this, particularly because RB Leipzig is seeking an enormous amount of money—€120 million—for their prized possession.

However, the source states that Real Madrid might make another offer for Nkunku during the summer of 2023, which could be advantageous given that he will be approaching the last year of his contract with the German giants, assuming that he does not leave the club during this current season. However, Real Madrid has decided to put an end to their chase of Nkunku for the time being.