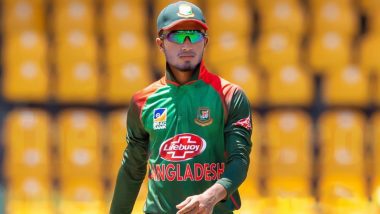 Left-handed batter Afif Hossain Dhrubo said that he doesn’t have any regrets after he missed out on scoring a century in the second ODI against South Africa at the Wanderers Stadium in Johannesburg. The Young Turk came to bat after the hosts reduced Bangladesh to 34 for five in the 13th over.

From there on, Afif played until the 46th over and made sure the Tigers reached a respectable score of 194 for nine on the board. The southpaw scored 72 runs off 107 balls with nine fours before getting out to Kagiso Rabada, who picked up a five-wicket haul in the Pink ODI.

He was also involved in a useful 86-run stand for the seventh wicket with Mehidy Hasan Miraz, who also scored 38 handy runs lower down the order. On not being able to score the ton, Afif said that it didn’t bother him much and he wished to contribute whole-heartedly for his team.

I always try to bat according to the situation: Afif Hossain on the South Africa ODI

“I don’t have any regret (missing out a century). I always try to bat according to the situation and I am fine with whatever I achieve. In future, if I get a similar chance, I would try to do well,” Afif said.

The Khulna-born Afif said that keeping his composure in crunch moments has helped him grow as a batter over the time period.

“There is no big mystery behind it staying calm and composed and the only thing is that I always try to remain the same and try to bat in the same manner whatever the situation is,” he added.

Afif’s knock went in vain as South Africa won the match by seven wickets with 12.4 overs left. Moreover, they drew level in the three-match ODI series. Quinton de Kock and Kyle Verreynne scored half-centuries and took the Proteas over the finishing line. But it was Rabada, who won the Player of the Match award for picking up five wickets.

The third and final ODI of the series is set to take place on Wednesday, March 23 at the SuperSport Park in Centurion.