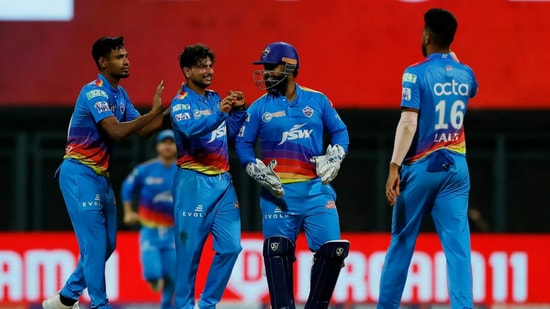 Kuldeep Yadav bowled an outstanding spell for Delhi Capitals against Kolkata Knight Riders in their fixture on Thursday, taking four wickets for 14 runs at an economy rate of 4.2. But surprisingly, DC skipper Rishabh Pant chose not to bowl him out ahead of the slog overs, instead tossing the ball to Lalit Yadav.

Kuldeep was introduced immediately after the powerplay, and delivered immediately, removing Baba Indrajith and Sunil Narine in successive balls. His first over gave away only three runs along with those two wickets. The next one went for 10 runs during Nitish Rana and Shreyas Iyer’s 48-run partnership, but Kuldeep was the only one who could break it in the end.

Kuldeep Yadav takes 4-14, does not complete his four-over quota

He returned in the fourteenth over and removed Shreyas Iyer and Andre Russell within the space of four balls. Shreyas fell short of a half-century and fed a bottom-edge to the keeper, and Russell was stumped after dancing far out of his crease.

Instead of Kuldeep finishing his quota, Lalit Yadav changed ends and was given the ball for the 17th over, presumably to bowl to the two left-handers Rinku Singh and Nitish Rana. But it didn’t have the result they expected; Lalit was tonked for 17 runs after serving a couple of pies to Rana, who walloped him for two massive sixes.

Fans on Twitter were confused by the decision to not let Kuldeep complete his four overs.

Kuldeep Yadav not finishing his quota will be one of the biggest mysteries this season. Four wickets in three overs. #IPL2022

Just saw Kuldeep hasn't bowled his fourth over. When Kolkata failed, Delhi had to avoid his fifer. 🌚 #IPL

Just because you had two left-handers in you don't bowl Kuldeep who had 4-fer and feed pies of Lalit.

Kuldeep won't be completing his 4 overs in a game where he bowled best figures of his IPL career. Warra captain Pant.