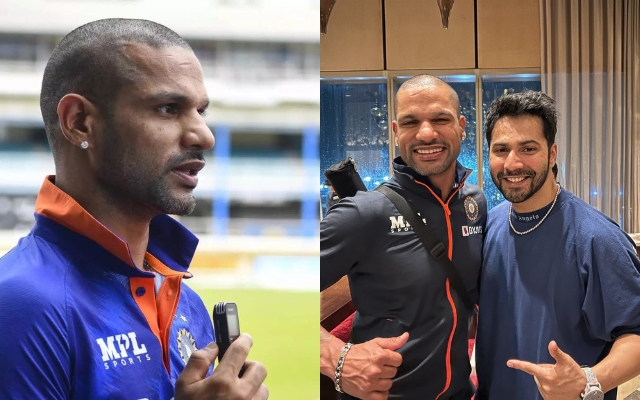 Even though they have the same surname, it took years for Bollywood star Varun Dhawan and senior Indian cricketer Shikhar Dhawan to snap a photo together. On Saturday, when the Indian cricket team was leaving for Zimbabwe from the Mumbai airport, Varun was ecstatic to see Shikhar and the other members of the squad (August 13).

Varun posted the following when uploading the photographs on social media:

“At 4 in the morning, I was like a boy in a candy shop. Got very excited to meet and chat with our Men in Blue about their upcoming tour. Also, @SDhawan25 asked me a couple of riddles.”

Shikhar Dhawan leaves for the tour of Zimbabwe

The Southpaw will be participating in the next one-day international series against Zimbabwe, which will begin on August 18 in Harare and include three matches. Due to a change in leadership, the Board of Control for Cricket in India has given him the responsibility of serving as KL Rahul‘s deputy in the next white-ball series (BCCI).

It came as a surprise when it was decided that Shikhar Dhawan would not continue to serve as captain for the tour of Zimbabwe. Dhawan had a lot of success in the West Indies, both as a batsman and as a leader of his team. Not only did he lead his side to a 3-0 victory against the West Indies in one-day internationals (ODIs), but he also scored two fifties and one hundred in those matches. His highest score was 97.

However, the change in leadership isn’t the only position on the team that has changed in preparation for this trip. In preparation for the next Asia Cup in the United Arab Emirates, Rahul Dravid, the head coach of Team India, has been allowed some time off. VVS Laxman, the head of the National Cricket Academy (NCA), has stepped in to take over the coaching responsibilities for the next trip while he is away.

After sweeping the One-Day International and Twenty20 International series in the West Indies by identical scores of 3-0 and 4-1, respectively, the Men in Blue will be hoping to maintain their hegemony in the form of white-ball cricket.

Varun here, is at least 10 times more popular than every other guy in the picture barring Shikhar Dhawan.

But did you solve the riddles? 🤔#thenationwantstoknow

Varun Aaron + Shikhar Dhawan = ?. 😜 Hehe you both should appreciate this riddle as well. .@Varun_dvn @SDhawan25