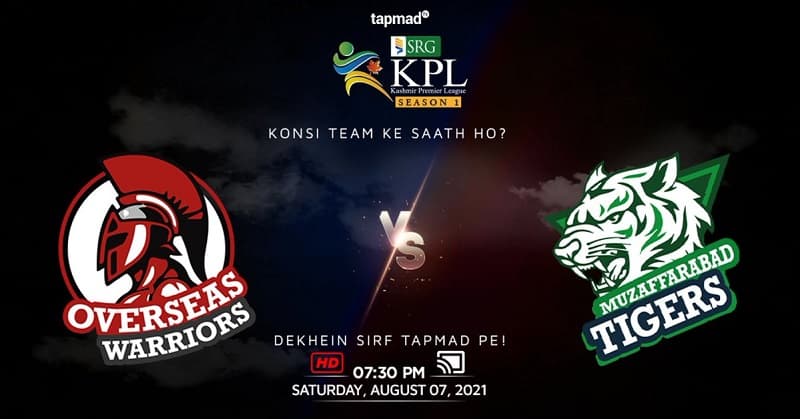 The inaugural match took place between Rawalakot and Mirpur Royals. However, as many as six franchises are taking part in the T20 league. They are Overseas Warriors, Bagh Stallions, Kotli Lions, and Muzaffarabad Tigers apart from the above two teams. Whereas, Muzaffarabad is hosting the entire league. The qualifiers will start on August 14th while the finals of the tournament will be played on August 17, 2021.

The 3rd match of Kashmir Premier League T20 will be taking place in August 2021. The tournament is all set to take place between the Overseas Warriors Vs Muzaffarabad Tigers. It is the third match of the series rolling out on the Mazaffaraabad Cricket Stadium where the game starts at 01:30 PM. However, both the teams will be entering the ground for the very first time against each other.

The tournament will be starting at 08:00 PM (IST) on August 7, 2021. The toss for the match will be happening half an hour before the match.

The teams are all set to roll out the matches this season. As it is, in season 1 of the series the teams will be facing each other for the first time. Looking, at the team squad and their latest games it is predicted that the team that will be making it to win the match is Muzaffarabad Tigers.

Who will win the toss – Muzaffarabad Tigers

Who will win – Muzaffarabad Tigers

Top Batsmen of the match:-

Most Sixes of the match:

Man of the Match: Waseem Jnr

The captain of the team Overseas Warriors is the Syed Imad Wasim Haider. And he is an all-rounder in the game and is a slow left-arm orthodox bowler. He is a left-handed batsman.

Muzaffarabad Tigers leads under the captainship of Mohammed Hafeez. He is an all-rounder player on the team where he is a right-arm off-break bowler and right-handed batsmen.

Geo Super is the official broadcaster of the league KPL. All the matches will be streaming on the channel live.