“Pakistan will be hammered from all sides”, Twitter reacts as Brendon McCullum confirms England will continue to play the aggressive brand of cricket in the Test series against Pakistan 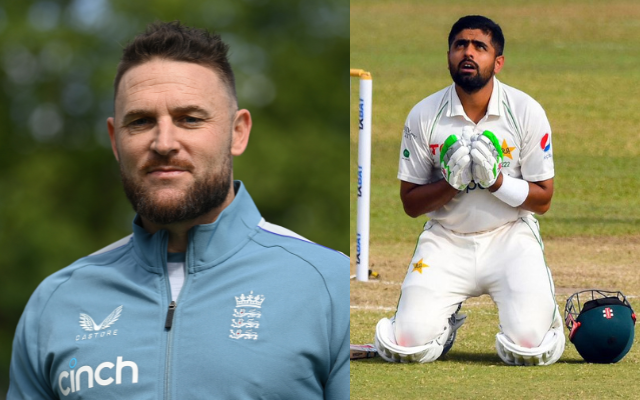 Brendon McCullum, coach of England, has warned their forthcoming opponents, Pakistan, that his team would attack aggressively. Even though McCullum’s bold approach has been quite successful for England since he was named coach earlier this year, it will be put to the test once again on Thursday when England begins a three-Test series in Pakistan.

With Pakistan still in the running to make it to the World Test Championship final at The Oval next year, this series is crucial. But first, they need to get some wins against England, which won’t be easy given how McCullum’s offensive unit has been playing with the red ball as of late.

Since McCullum took over as the coach in May, England has won six of seven Test matches they have played. Players like Jonny Bairstow, Ben Stokes, Joe Root, and evergreen quick Jimmy Anderson have flourished under McCullum’s guidance.

Even if their aggressive approach is costing them the game, McCullum wants his team to keep attacking Pakistan. McCullum feels responsible for the sport’s continued success and wants to provide exciting games for spectators. Mark Wood, England’s standout fast-bowler, was injured in the ICC Men’s T20 World Cup, and as a result, he will be unable to play in the upcoming first Test in Rawalpindi.

In his absence, Ollie Robinson and Jamie Overton might be called upon to join Anderson. Jack Leach and uncapped youngster Rehan Ahmed are in the team to provide spin options if the pitch is expected to aid the slower bowlers.

“We’ll be pushing for results but we want to play entertaining cricket,” McCullum told BBC Sport. “There may be a time where you risk losing to win and if Pakistan is good enough to beat us, that’s cool too,” he added.

You'll get Roads there. So That's Quite Easy To Do Blind Slogging https://t.co/P94iX8lT32

Maybe an easy task against indian 110kmph bowlers
..not against pakistan

“Still won’t be able to play in World Cup 202 due to seniors”, Twitter reacts as Shubman Gill as an ODI opener has an average of 70.71 from 10 innings
“Another reason why CSK fans love Watto”, Twitter reacts as Shane Watson said that the 2016 IPL Final was probably one of the worst games that he has had