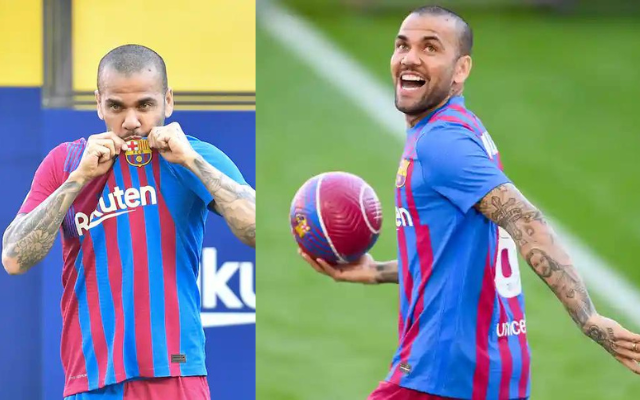 Dani Alves, a veteran defender who now plays for Barcelona, has taken to clarify that he would be departing the club at the end of the month when his current contract ends

Dani Alves, the right-back for Barcelona, announced on social media that he will be leaving the club this summer when his current contract expires at the end of June. He will be moving on from Camp Nou.

Alves had only been away from Barcelona for around seven months when he made his way back there on a free transfer after his previous deal with the Brazilian club Sao Paulo had run out. The player, now 39 years old, returned to Camp Nou five years after leaving the club. Nevertheless, he was not officially registered as a Barcelona player until January of this year.

During the second half of the 2021/22 season, Alves appeared in 16 games across all competitions and contributed with one goal and three assists. Because he was not listed with the UEFA Europa League team, the number of matches in which he participated was restricted.

The international football player from Brazil had inked a deal with Barcelona for a short-term deal that would expire on June 30. However, there had been discussions regarding the possibility of extending the veteran defender’s contract just until the end of the year so that he may be in peak physical condition for the FIFA World Cup that will take place later this year.

However, Barcelona has made the decision not to go through with such a transaction, in part because of their current financial condition and in part because of their pursuit of Cesar Azpilicueta, who is the captain of Chelsea. The Catalans sent the same information to Alves earlier in the week. The 39-year-old defender has now confirmed that he will be leaving the club soon by publishing an emotional statement on his Instagram account.

The following is a translation of what Alves posted on Instagram, as provided by ESPN: “Dear cules (fans of Barcelona), the moment to genuinely say farewell has actually come now. For more than eight years, I have devoted myself to this club, these colors, and this house. However, as is the case with everything else in life, the years pass, the pathways take a diversion, and the tales are written for certain moments in other locations, and this is how it has come to be.

They attempted to get rid of me, but they were unsuccessful. Yet, what you all cannot comprehend, or maybe you can, is exactly how tenacious and robust I am. A significant amount of time passed before football and life. I am always extremely thankful to those who appreciate them and decided to provide me with another opportunity to come back here so that I could say my last words.

But I will not be saying farewell until I have thanked everyone who worked behind the scenes, as well as everyone else who contributed to making ours wonderful. THANK YOU to each and every one of them. May it never be forgotten that even a lion who is 39 years old may continue to be a good crazy lion. May the world never forget this. Para sempre VISCA AL BARÇA!”

Even though the USMNT player has been linked with a move, the possibility exists that Sergino Dest will remain with Barcelona now that Alves has left the club.