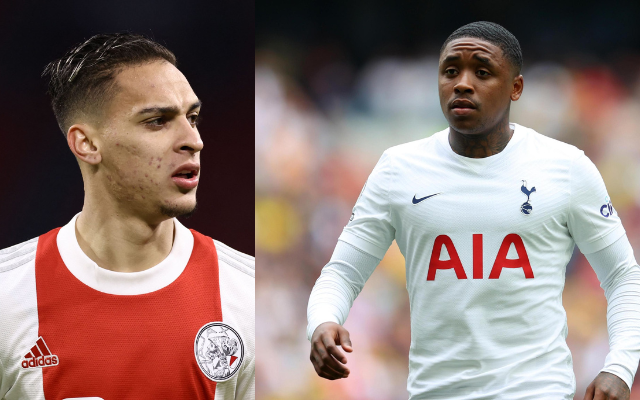 It has been claimed that Tottenham Hotspur is prepared to trade Steven Bergwijn to AFC Ajax as part of a deal to acquire Antony this summer.

It has been reported by Miguel Delaney of the Independent that Manchester United is in danger of missing out on the opportunity to sign AFC Ajax winger Antony. This is because Tottenham Hotspur has entered the race for the transfer of the Brazilian and is willing to offer a player in exchange for him.

After having a couple of successful seasons in the Netherlands while playing for Erik ten Hag, Antony has established himself as one of the most sought-after young wingers in all of Europe. This summer, the Red Devils have been noted as having a significant interest in the speedster who is 22 years old.

As a result of Marcus Rashford’s poor performance in the previous campaign, Manchester United are looking to add other wide forwards to their roster. The Red Devils have been short on numbers in the attacking third as a result of the impending loaning out of Amad Diallo for a second time and the departure of players like Jesse Lingard and Juan Mata due to their status as free agents.

Antony has emerged as a prominent target for Manchester United as they try to bolster their squad with the addition of a more experienced winger. This is the case even though the juvenile prodigy, Alejandro Garnacho, may be elevated to the senior side. Recent rumours even suggested that the heavyweights of the Premier League were getting closer and closer to completing the transfer of the Brazilian international player.

To complicate matters further for Manchester United and their pursuit of a deal to capture Antony, Tottenham Hotspur has signaled that they are ready to make a counteroffer. According to Miguel Delaney, the giants of north London have also shown an interest in acquiring the services of the AFC Ajax star player, and they are prepared to make a counteroffer in the shape of Steven Bergwijn as part of any potential transaction.

Since the beginning of the January transfer window, it is no secret that Ajax has had a significant interest in Bergwijn and that they are still chasing the Netherlands’ international player. However, Tottenham has previously rejected an offer made by the Dutch champions for its striker and is now requesting a figure of twenty-five million euros in exchange for his services.

But since it is difficult for Ajax to come up with the cash, Tottenham is now investigating the option of providing Bergwijn as part of a deal to sign Antony. This transaction will most likely include a combination of cash and a player. The Brazilian’s arrival to Spurs would improve the team’s frontline in terms of both depth and quality, while Ajax would get a player who could directly step into the role vacated by their star striker.

Manchester United has to lift their game in the next weeks in order to compete with its competitors, who are already making significant headway in the transfer market. After having Jurrien Timber pull out of a move, it would be an unfortunate beginning to the summer transfer window for ten Hag and United if they lost Antony to Tottenham Hotspur.