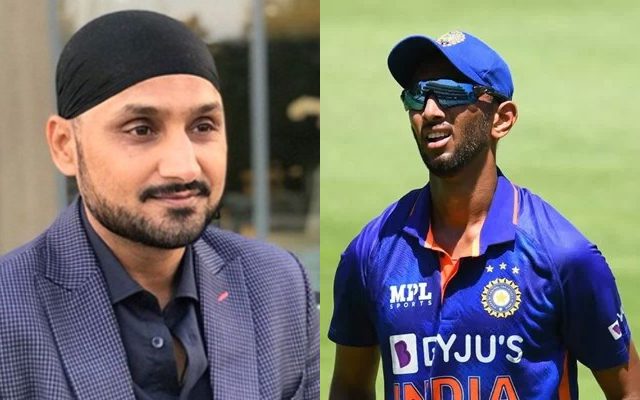 Prasidh Krishna was the standout performer with the ball in hand for India in the second One Day International against the West Indies, which ended in a 44-run victory for the hosts. The lanky Karnataka speedster tore through the West Indies batting line-up and returned with amazing stats of 12 runs, three maidens, and four wickets in nine overs. Even though he is yet to represent India in the shortest format, Krishna has had an outstanding start to his One-Day International career, taking 15 wickets in only six matches.

Among those who were pleased by Krishna’s performance was former Indian off-spinner Harbhajan Singh, who said that he should be included in the team that will go to Australia for this year’s World Twenty20 tournament. As part of a chat with Star Sports, Harbhajan Singh praised the speedster’s ability to extract more bounce from the ball than any other bowler. He also said that the pacer might be a problem on the bounce-filled wickets of Australia.

“Today, he [Prasidh Krishna] has shown his abilities. I believe he will play Test cricket in the future. In any event, we’ll be seeing him in One-Day International cricket, and I’m hoping to see him in the T20 World Cup in Australia as well. There is more bounce and speed on those vast grounds in any case, and with his height and quickness, I believe Team India will gain a lot there,” Singh said.

If you compare him to the other bowlers, Prasidh Krishna has greater bounce and pace: Harbhajan Singh

The former spinner, who has 711 international wickets to his name across all forms for India, has identified five attributes that distinguish him from other bowlers on the field. He said, “I’m not going to lie when you join a team, the first thing you need is something that distinguishes you from the rest, which he has. In comparison to the other bowlers, he has more bounce and pace, and the rapidity of the ball after pitching is greater.”

Batter’s have been bothered by the sharp bounce he creates with his rapid high-arm movement, which he uses to his advantage when playing for the Kolkata Knight Riders in the Indian Premier League. Harbhajan said the following in response to this:

“His [Prasidh Krishna’s] positive is his approach. With his smooth movement and extremely nice run-up, he is a very talented player. He also has a supple physique to go along with it. It is because of his flexible physique that he has an advantage over the other bowlers, and this is his most valuable weapon.”

Also, the former spinner believes that Prasidh Krishna, along with Jasprit Bumrah, would make up for a devastating combination on the fast bouncy surfaces in Australia when the World T20 tournament takes place later this year.

“As long as he continues to play, he will continue to learn. When Jasprit Bumrah first arrived, he was a far less accomplished bowler than he is now. If he continues to play consistently for six to eight months, he will improve his bowling skills significantly. He has left a lasting impression on me. I am certain that the Jasprit Bumrah-Prasidh Krishna combination will contribute significantly to Team India’s success in the coming days,” he said.