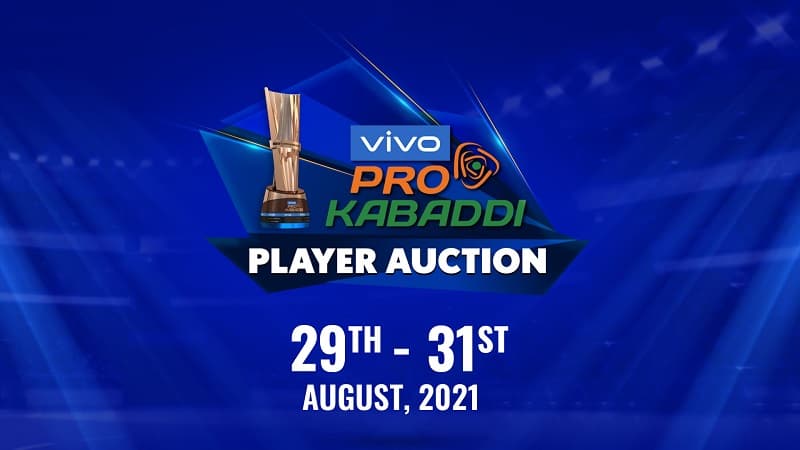 The league was supposed to take place in 2020, but due to the public concerns of Covid-19, it was annulled. Nevertheless, PKL is back with all its 12 teams and the procedure for the game begins with an Auction of players.check Pro Kabaddi 2021 Auction Date, Time, Price, Players List, Format, Where to watch Live Streaming?.

India’s most prestigious sporting event Pro Kabaddi League is all set to roll once again. Pro Kabaddi League popularly known as PKL had 7 successful seasons, 2014 was the first season. Season 7 was won by Bengal Warriors. This year marks their Eighth season of PKL. The auction date for PKL 2021 is scheduled to take place on August 29th- August 31st, 2021.

Season 8 Pro Kabaddi League is set to kick off with the auction dates from 29th August 2021- 31st August 2021 in Mumbai. Every team has 4 Crores to buy their Players. Siddharth Desai was the costliest player in Season 7. Telugu Titans buy Siddharth Desai for Whopping 1.45 Crores.

Also Check: Pro Kabaddi 2021 Auction Live Telecast, Where to Watch Live Streaming? And How to Watch on Mobile?

12 teams participate in the PKL every year. A total of 422 players will be at the bidding booth. Nearly 58 are overseas players and 87 are from the Future Kabaddi Heroes Programme (FKHP). Each franchise has the option of retaining a maximum of six players and three New Young Players (NYP).

The teams are split into 4 categories A, B, C & D, and NYP. The squad size can be between 18 and 25, including three from the Future Kabaddi Heroes program and two to four overseas players.

The Bengal Warriors are the defending champions of PKL. In the Previous Season Auction, Bengal Warriors Brought Mohammad Nabibaksh as a defender for Rs 77.75 Lakhs. All the players are listed here with the base prizes based on their categories.

Patna Pirates and Puneri Paltan have retained four players each, the maximum number a franchise is allowed to. Jaipur Pink Panthers, U Mumba, UP Yoddha have chosen to not retain any of the players from last season and will use the auction to build a completely new squad.