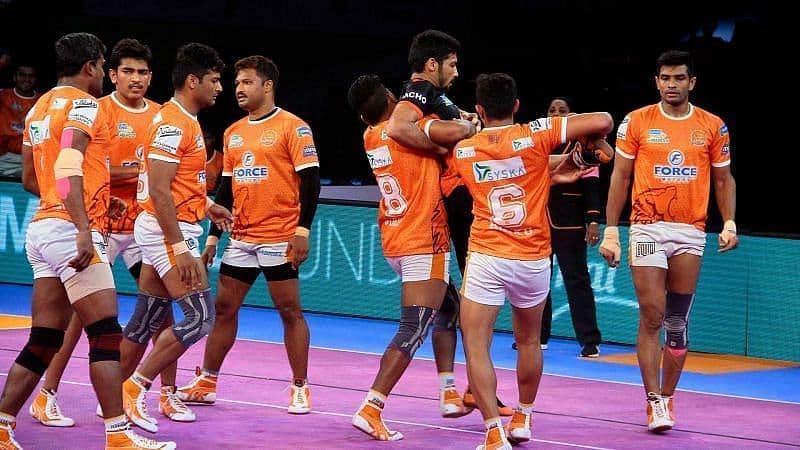 Kabaddi is a sport that is played in rural parts of India. Later, in 2014 it was launched at a professional level named as Pro Kabaddi League. Check Puneri Paltan Team 2021 Players List, Owner, Captain, Stadium, Fixtures.

12 teams play each year in the League and battle through victory. The game follows the same rules as kabaddi with a few additions. Pro Kabaddi had 7 enthusiastic seasons, and fans are expecting the same this year.

Puneri Paltan is one of the teams that participate in the Pro Kabaddi League each year. It was established in the same year as the inaugural season, 2014. The team is based in Pune, Maharashtra. So take a look at the details of the team like Squad, Complete Players List, Owner, Captain, Stadium, And Fixtures.

Puneri Paltan is one of the hardworking teams in PKL. The reason they are unmatched by the other teams is in the team spirit. The team has had an unsuccessful year initially. However, they clawed back to make it to the playoffs in 2016. They have players like Surjeet Singh who is an incisive cover defender of the team.

Take a look at the entire list of players here.

Puneri Paltan 2021 Who is the Owner and Captain?

The team is owned by Suresh Kotak and their Family. Anup Kumar was named as Head Coach of the Puneri Paltan. The team has its home color as Orange and White.

Puneri Paltan plays all its home matches in Shree Shiv Chhatrapati Sports Complex, Pune. The complex was built in 1994. The maximum capacity of the complex is 11,900. The complex is operated by the Government of Maharashtra.

Puneri Paltan Stats over the 7 Seasons

Puneri Paltan has never been able to win the title in these 7 years. In 2016, the team made their way through playoffs which were seen as an improvement in the previous 2 years. Here, check out the entire statistics of the Paltan over the 7 seasons.