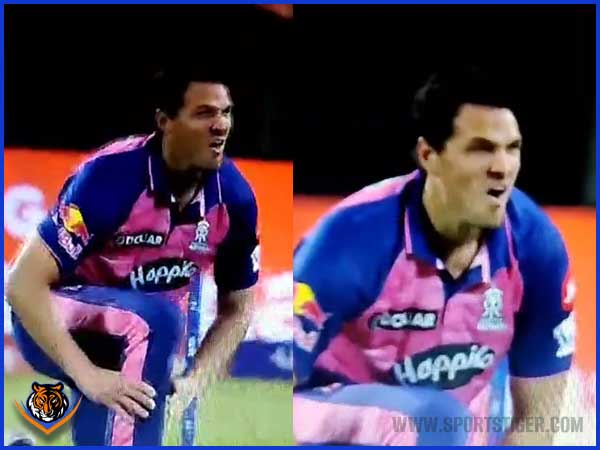 Rajasthan Royals’ fast-bowler Nathan Coulter-Nile will miss the remainder of the IPL after picking up a side strain in the only game he played.  RR confirmed the news on their Twitter handle, and have not yet named his replacement. Coulter-Nile was purchased by the Royals at his base price of 2 crore at the auction.

The right-arm quick played in just one game for the Royals, against Sunrisers Hyderabad on March 29. It wasn’t a great outing, with the Australian going wicketless and ending with 48 runs from his three overs. He sustained an injury in that game during the Sunrisers’ innings, and was seen going off the field before completing his quota of four overs.

Coulter-Nile was seen clutching his leg before he could bowl his fourth over. He started with a no-ball and limped off the field, which led to speculation that it could be a recurrence of his old injury. Riyan Parag completed the over in his place. He will now fly back home to Australia to rehabilitate.

“Unfortunately, I have the hard task of wishing him farewell,” Royals’ head physio John Gloster said in a video posted by the franchise on Twitter. “It’s always hard to lose someone, particularly when it’s through injury. And you know we were really looking forward to spending a lot of time with you throughout this tournament. Unfortunately, that’s not going to be. But you are a big part of us. Anything you need from us, we are always here. We look forward to having you back with us, whenever that might be.”

Despite Coulter-Nile’s awful performance in that lone game, losing him will be a big setback for the Royals. The 34-year-old hasn’t played in Australia colours for some time, with his last international appearance occurring back in June 2019. Still, the pace combination of him and Trent Boult could have been a lethal one had Coulter-Nile managed to find form.

Coulter-Nile played for Mumbai Indians during the 2020 and 2021 editions of the IPL. He only played five games for MI in 2021, but picked up seven wickets including one four-wicket haul, averaging 18.14 with an economy rate of 6.35. In Australia’s Big Bash League that ended earlier this year in January, where he plays for the Melbourne Stars, he claimed 7 wickets in as many games.

Rajasthan Royals have had an excellent start to their season, winning two out of their first three games. They lost their most recent encounter against Royal Challengers Bangalore last night, after an extraordinary innings from Dinesh Karthik snatched RCB a victory when they were staring down the jaws of defeat. Despite the blip in their momentum, the Royals will be pleased with how they’ve started so far. They trounced Sunrisers Hyderabad by 61 runs in their season opener, then registered a convincing win over Mumbai Indians in their second game.