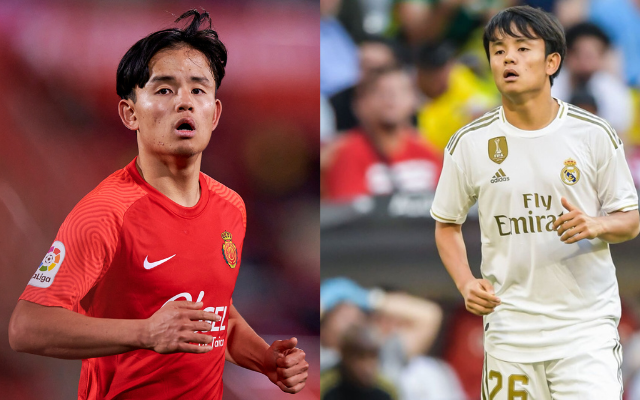 According to reports, Real Sociedad will soon make a new offer to sign Japanese forward Takefusa Kubo, who is 21 and plays for Real Madrid

Defensa Central, a Spanish news outlet, says that Real Sociedad will try harder to sign Takefusa Kubo during the summer transfer window. Real Madrid’s 21-year-old forward is a player they want to keep, but the reigning La Liga champions only want to loan him to La Real.

Takefusa Kubo moved from FC Tokyo to Real Madrid with the hope of being a long-term solution for the Spanish club in the final third. But the Japanese player hasn’t been able to break into the first team at the Santiago Bernabeu, and it’s not his fault.

Kubo can’t play for Real Madrid until one of the Brazilian stars, Eder Militao, Vinicius Jr., or Rodrygo Goes, moves out of one of the three non-EU spots. Since Vinicius and Rodrygo haven’t gotten their Spanish passports yet, Real Madrid can’t give Kubo a chance to show what he can do, even though Carlo Ancelotti is a fan of his skills.

So, the 21-year-old will have to leave Santiago Bernabeu for the fifth time in the summer transfer window. Real Madrid hopes to loan him out again. Several La Liga teams want to sign Kubo, but Real Sociedad seems to be the most serious about it.

But the Basque giants want to sign Kubo permanently away from Real Madrid, which has made talks between the two clubs take longer. The current La Liga champions only want to loan the player out, so it doesn’t look like the talks will end soon.

Mikel Oyarzabal is coming back from a long-term injury, and Adnan Januzaj is leaving the Reale Arena because he is a free agent. This summer, Imanol Alguacil needs a wide attacker to replace Mikel Oyarzabal and Adnan Januzaj. So, Real Sociedad could go after Kubo, since the Real Madrid forward is willing to join them in the summer transfer window.

Real Madrid and Real Sociedad might be able to work things out soon because La Real is getting ready to make a new offer for the 21-year-old player. People think that if the Basque giants put a “buyback” clause in the deal to sign Kubo, the two clubs might agree. Real Madrid wants to get rid of Kubo before their preseason tour, so it will be interesting to see if the latest offer works.