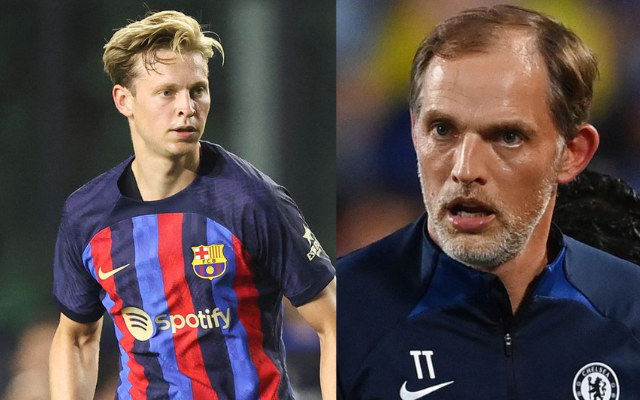 In the last two weeks leading up to the start of the summer transfer window, Chelsea is making an aggressive move to acquire the services of a handful of Barcelona’s most prominent players. Thomas Tuchel is looking to strengthen his options after losing a significant number of top players in the summer and has been after Pierre-Emerick Aubameyang and Frenkie de Jong.

On the other hand, it is not anticipated that Chelsea will have much success in their chase of Aubameyang. The international player from Gabon is said to have notified the club of his willingness to continue playing for them at Camp Nou, putting an end to any speculation over a transfer to Stamford Bridge.

In what concerns de Jong, it would seem that the Blues are prepared to battle to the very end if one is to accept the claims that have come from Fabrizio Romano.

During the whole summer, the heavyweights of the Premier League have been keeping tabs on the Dutchman intending to sign him as a possible long-term replacement for N’Golo Kante. Tuchel hopes to bring him on board.

Where will Frenkie De Jong finally move to?

Because the Frenchman’s present contract with the club will not be renewed after the next campaign, the future of the player at Stamford Bridge is now unknown. As there are currently no concrete indications of a possible contract extension. So, they are now looking to strengthen their midfield position.

This is where Frenkie de Jong steps into the mix to make his presence known. Because of his technical skill and his immense potential, the midfielder who now plays for Barcelona is highly regarded, which makes him a perfect target for Chelsea.

Even though the player has rejected the club’s efforts to pry him away from Camp Nou, the Blues are getting set to speed up their chase of the player in the hopes of signing him before the end of the month.

As Barcelona attempts to cut the bloated payroll cost that has kept them from registering Jules Kounde this summer, they may also be receptive to authorizing the transfer of the Dutchman.

Chelsea and utd cant convince him why are they continuing to try and sign him. They answer is going to be no like we hear every single week

If barca sells fdj to chelsea then we might be doing them too much favours. They dont deserve it tbh.

No point if he wants to stay

I think we should just give up on silva and go for a rb. de Jong has been a beast ever since these links.

Bro we need him ASAP. Kante is injured because of hamstring now. We need FDJ immediately!!!

I don't think United supporters care if Chelsea get Frenkie because it adds more fuel for our GlazersOut campaign.

FDJ doesn't want to leave, just buy Auba for €25m, it would help us to buy Bernardo also so it's a W for both.

Well we not getting Bernardo so go away

All this for Frenkie just to chill at the beach

‘They expect the likes of Pankaj Tripathi in Mirzapur role to promote World Cup’-Twitter reacts as Amazon lead the race for ICC Digital Rights 2024-31
‘As an able cricket administrator, he left his imprint on the game’ – Twitter mourns the death of former BCCI secretary Amitabh Chaudhary