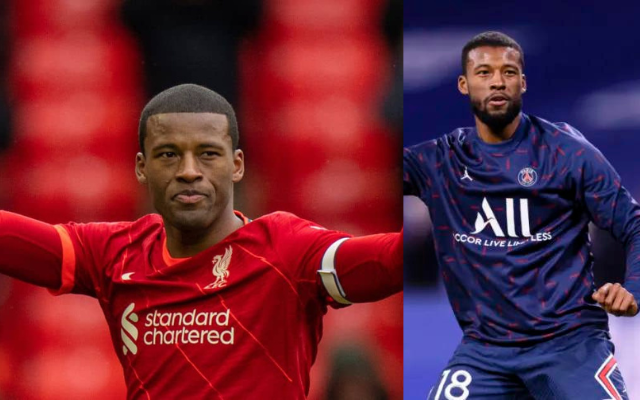 According to recent reports, Liverpool is considering the opportunity to acquire Georginio Wijnaldum temporarily over the next summer.

This summer, Liverpool is reportedly looking to add a new midfielder to their roster, as reported by the Irish Daily Star (h/t Paisley Gates). They have Jude Bellingham as their primary target, but they are well aware that the outstanding player now playing for Borussia Dortmund may not be interested in leaving the club any time soon.

Because of this, Jurgen Klopp has been compelled to investigate other opportunities available on the market, and Georginio Wijnaldum has emerged as one of the prospective replacements. According to the report, Liverpool is looking into the possibility of re-signing the Dutch player on loan for the remainder of the season.

Wijnaldum started a new chapter in his life during the summer of 2021, when he joined Paris Saint-Germain on a free transfer after having a prosperous run at Anfield. It at first looked to be a move that made sense given the fact that the Parisian powerhouse had just recruited several high-profile players, including Lionel Messi, Achraf Hakimi, and Gianluigi Donnarumma, amongst many others. They were considered to be one of the teams with the best chance of winning the UEFA Champions League.

Despite this, Wijnaldum’s first campaign with the team has been nothing short of a complete and utter catastrophe. The former Liverpool star had difficulty making any kind of impression at PSG, as he was pushed further and farther down the pecking order behind players like Marco Verratti, Idrissa Gueye, and Danilo Pereira.

Wijnaldum’s situation is not expected to improve despite the recent hiring of Luis Campos as the new sports director at PSG. As a result of this, the former Liverpool midfielder has been linked with a transfer away from the capital of France, where he now plays, and several teams have shown interest in acquiring his talents.

Will Liverpool decide to bring him back?

Arsenal, Newcastle United, and West Ham United are just some of the clubs that at one point or another considered the possibility of signing the Dutch player. However, it would seem that Liverpool is now keeping tabs on the PSG player. Liverpool is eager to acquire a new midfielder in time for the start of the new season.

The Reds have been fairly busy in the market this summer, as seen by the fact that they have signed players like Darwin Nunez, Calvin Ramsay, and Fabio Carvalho. The subsequent acquisition of Wijnaldum may go a long way toward shoring up their alternatives in the center of the field, which will help Liverpool fight with Manchester City for the league crown.

Although Liverpool have also made contact with Marco Asensio, Wijnaldum would be a better choice owing to his expertise in English football. This is because Wijnaldum has played in the Premier League before. The fact that the PSG midfielder is already acquainted with Jurgen Klopp’s tactical system and has the potential to become a significant first-team option at Anfield makes him an excellent coup for the Merseyside giants, who are looking to strengthen their squad.