“Sachin or Virat?”, Marnus Labuschagne comes up with a witty answer to the question 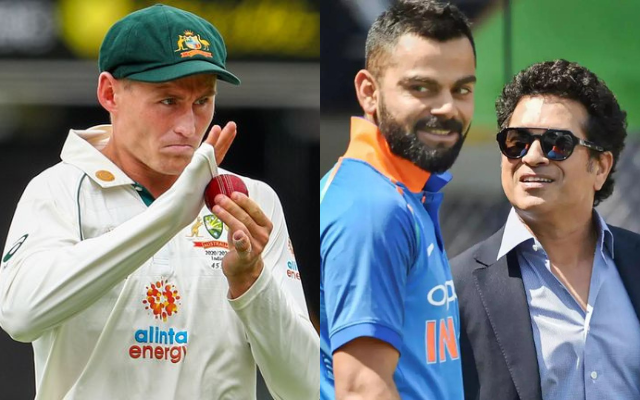 It is no secret that Sachin Tendulkar made ‘cricket’ famous because of his exquisite batting. He was known for his ability to play eye-catching shots against world-class bowlers during the heydays of his cricketing career.

Virat Kohli, who is following the footprints of Sachin Tendulkar has also been statistically impressive in numbers across all three formats of the game. He scored 8119 runs in Tests at an average of 48.9 whereas he aggregated 12584 runs at an average of 57.7.

Sachin or Virat? – Marnus Labuschagne comes up with a witty answer

Kohli averages 52.7 in T20Is wherein he scored 4008 runs. India’s high-scoring machine scored 73 centuries in international cricket (45 in ODIs, 27 in Tests and 1 in T20Is). Meanwhile, Steve Smith and Marnus Labuschagne were recently caught in a candid interaction with Prime Video.

The duo were seen talking about Indian players ahead of the Border Gavaskar Trophy series. Meanwhile, Steve Smith asked Marnus Labuschagne to pick between Sachin Tendulkar and Virat Kohli.

To which, he replied, Virat Kohli in white ball and Sachin Tendulkar in Tests. Meanwhile, Virat Kohli was last seen donning the national outfit during the second ODI against Sri Lanka at the Eden Gardens in Kolkata.

The right-handed batsman recently made the headlines after he brought up his 45th ODI century in the ODI opener in Guwahati. He will be looking forward to doing well in the third and final ODI against the Sri Lankan cricket team on January 15 in Kerala.