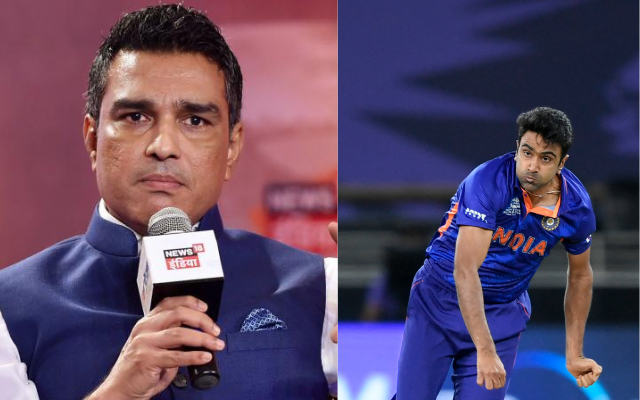 Sanjay Manjrekar, a former batsman for India, has lauded the decision of the selection committee to reintegrate Ravichandran Ashwin into the white-ball system. After a hiatus of eight months, the spinner, who is 35 years old, returned to action when he was selected for the five Twenty20 Internationals that are being played against the West Indies.

In contrast to Ravi Bishnoi, the senior bowler from Tamil Nadu has already participated in all three of the series’ matches. He is steadily establishing a claim for a position in the 2022 T20 World Cup team, and his recent performance of three wickets at an economy of 6.66 shows that he is doing so.

The position of the main spinner is now held by Yuzvendra Chahal, and the fact that the all-important event will be held in Australia means that the selectors will be hesitant to draught a large number of spinners in the team. As a direct consequence of this, Ravichandran Ashwin, Kuldeep Yadav, and Ravi Bishnoi are competing against one another for a single position.

On Friday’s episode of Sports Over the Top, Manjrekar made the following observation in reference to Ashwin’s optimal performance, which occurs when an aggressive bowler like Chahal bowls in tandem with him from the opposite end.

What did Sanjay Manjrekar say about Ravichandran Ashwin?

“I believe that it was a wise decision to bring Ashwin along on this trip (to the West Indies). Ashwin has begun to make a significant impression in the IPL over the course of the last few years. When Ashwin is playing alongside someone like Yuzvendra Chahal, I like seeing them together. Therefore, it is not up to Ashwin to single-handedly turn the tide of the situation,” Manjrekar said.

It is important to keep in mind that both spinners played in the Indian Premier League for the Rajasthan Royals (RR) in the year 2022. The pair was instrumental in the team’s run to the championship game, which was the franchise’s first appearance in the final since winning the championship in the first season in 2008.

In response to a claim made by Ashwin that he had perfected the skill of limiting runs in the shortest format, Manjrekar said the following:

“As a Twenty20 spinner, Ashwin was lacking in this particular area. He put a lot of emphasis on the economy, but when you have somebody like Chahal, or if there’s another wicket-taking wrist spinner, then Ashwin becomes a great complement because Ashwin has perfected the art of being economical in Twenty20 cricket. Chahal is an example of somebody who takes wickets.”

After 2017, Ashwin was not considered for selection in the Twenty20 Internationals. As a result, he played the format mostly during the Indian Premier League. Since 2018, the player, who is now 35 years old, has held a 7.46 economy in the cash-rich league.

The inclusion of two wrist spinners in the starting eleven may have appeared unorthodox at first, but Yuzvendra Chahal and Kuldeep Yadav have shown with their performances that they are more than capable of handling the responsibility. Although Chahal still maintains his position as the leader of the pack, the same cannot be said for his adversary.