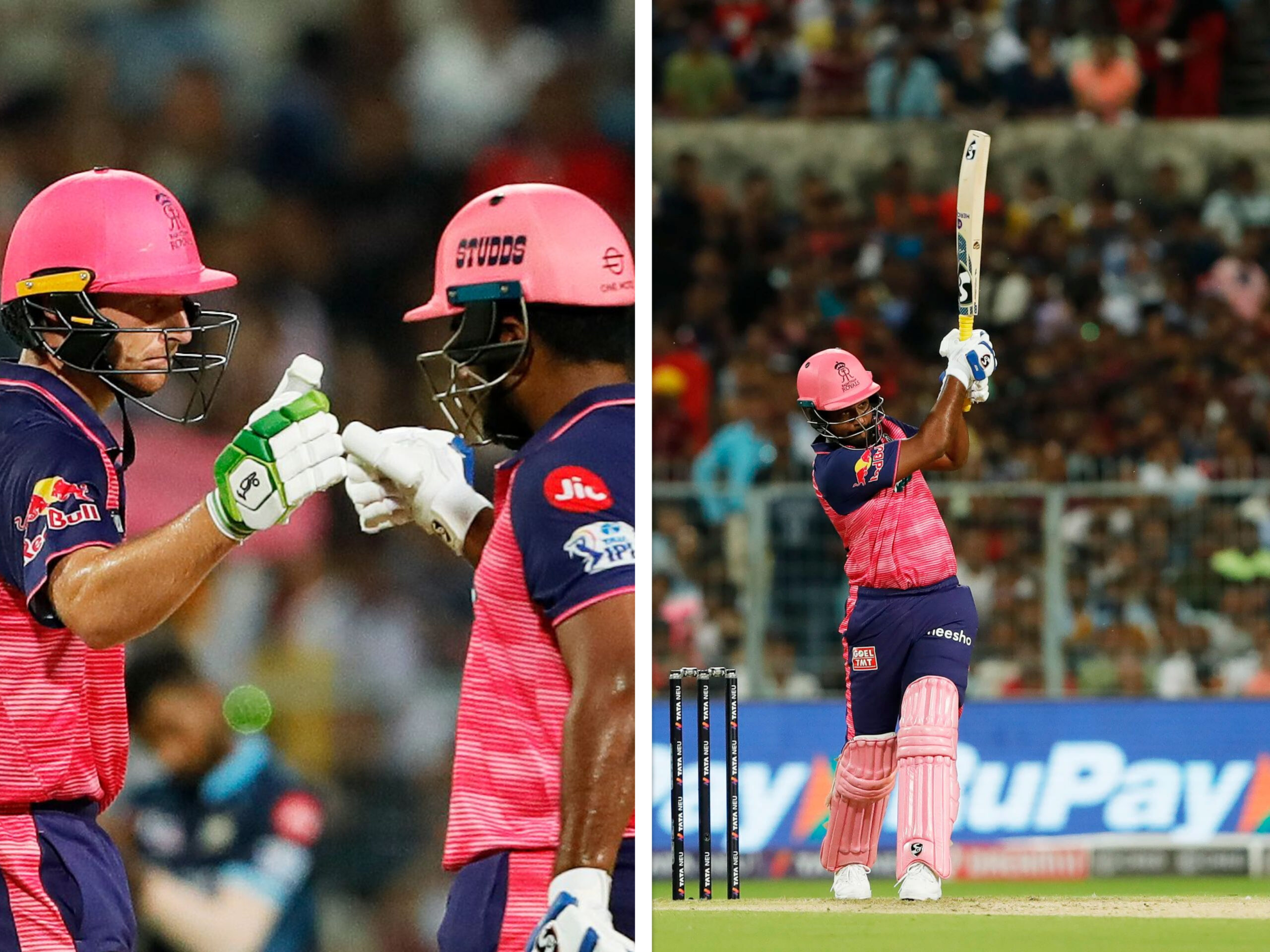 Sanju Samson played a fine innings for Rajasthan Royals against Gujarat Titans in the first Qualifier of the IPL playoffs, at Eden Garden in Kolkata. He bludgeoned 47 off 26 balls at a strikerate of 180, his knock including five fours and three sixes. Samson’s innings set the Royals up with the start they needed.

Yashasvi Jaiswal couldn’t continue his dream run, and the Royals faced an early setback when they lost their opener in the second over to Yash Dayal for 3. The skipper walked in with his side at a precarious 11-1.

But the second half of the powerplay belonged entirely to Samson. He smashed a four and six off Yash Dayal, then punched consecutive boundaries off Mohammad Shami. Alzarri Joseph was slammed for a couple of sixes, and the Royals ended with an excellent powerplay score of 55-1. Sanju had scored 30(13), while Buttler ticked along at 15(16).

Young legspinner Sai Kishore, playing only his third match of IPL was the one to finally send back the rampaging Samson in the tenth over. His first over had gone for 12 runs thanks a couple more glorious boundaries from Samson, but the leggy got his revenge. The ball dipped on the batter, and he ended up dragging it to Alzarri Joseph on the leg side.

Samson was left out of the squad for T20I series against South Africa at home this year. This was despite another good season, where he averages 30 from 15 innings with 421 runs arriving at a commendable sttrikerate of 150. Since he made his T20I debut against Zimbabwe in 2015, Samson has only played 13 matches for India.

The winner of today’s match goes directly through to the final at Narendra Modi Stadium in Ahmedabad, Gujarat while the loser has another shot. They will play the winner of Eliminator 1 between Royal Challengers Bangalore and Lucknow Super Giants, scheduled on May 25.

Really respect that after all these years, getting criticised so often by people who don’t like his approach, not getting selected internationally, Sanju still sticks by his guns and plays the way he thinks will benefit his team the most

It is quite funny how "if Sanju wants to play for India" he seemingly has to play the ultra-aggressive, high-variance role which India desperately needs, but with the consistency of a conservative anchor.

Just to be perfect mate, and you're in

Brilliant from Sanju Samson. T20 cricket isn't measured in usual landmarks like 50s. It is about the impact you make.

Sanju really has some balls. Not one bit perturbed despite being left out from the Indian T20 squad. Hopefully he gets his rewards soon. Too good to be continuously on the sidelines.

The debate shouldn't be 'should Sanju Samson be in India's T20I squad?'

‘People wondered where the next superstar overseas batter would come from, here he is’ – Liam Livingstone blitz stuns Twitter
‘Jos Buttler peaking exactly when required’ – RR opener draws praise on Twitter for his 89 after slow start