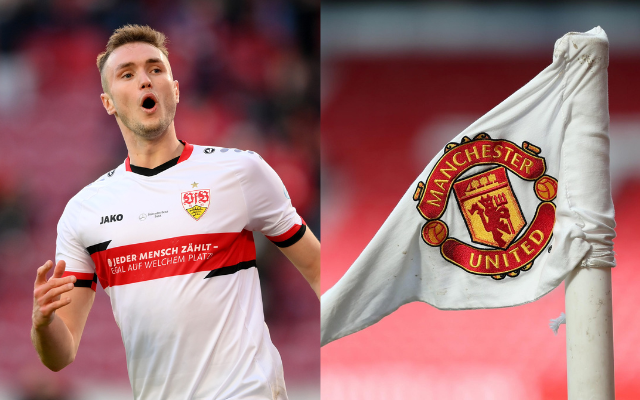 Sasa Kalajdzic, a striker for VfB Stuttgart, is said to look up to former Manchester United midfielder Nemanja Matic as a role model, as reported by the Daily Star.

The Red Devils are looking to add a new striker to their roster at this time. Given that Cristiano Ronaldo is set on leaving the club, it is likely that they will be left with fewer choices upfront.

Kalajdzic has a height of 6 feet and 7 inches, and he is currently signed to a contract with Stuttgart that runs through 2023. Because of his height and his skill set, the 25-year-old player has often been compared to other players like Zlatan Ibrahimovic and Peter Crouch.

In addition to having Serbian ancestry, Kalajdzic began his professional career as a CDM. The striker had a rough season in the previous season. He scored 16 goals across all competitions.

During the previous season, he was sidelined with a shoulder injury and also contracted the coronavirus. The striker had an injury to his calf as well, which limited his playing time across all competitions to only 16.

What did Sasa Kalajdzic say?

Despite this, the Austrian finished with six goals and is high on the priority list for Manchester United. The following is what Kalajdzic asserted:

“I’ve also been compared to [Zlatan] Ibrahimovic and Peter Crouch, and I’ve heard descriptions ranging from “tall and lanky” to “tall and a “Ibrahimovic-Machine!””

He added: “I used to play holding midfield when I was younger, and one of the players at Manchester United named Nemanja Matic was someone I looked up to as a bit of a hero. In addition to that, he is of Serbian descent, and so am I.”

Sunday will mark the beginning of the Premier League season for Manchester United’s Red Devils when they host Brighton & Hove Albion at Old Trafford. Even though Ronaldo is still dissatisfied with his role at the club, it seems that he will extend his stay beyond the current transfer window. During United’s preseason match against Rayo Vallecano, the Portuguese player exited the stadium earlier.