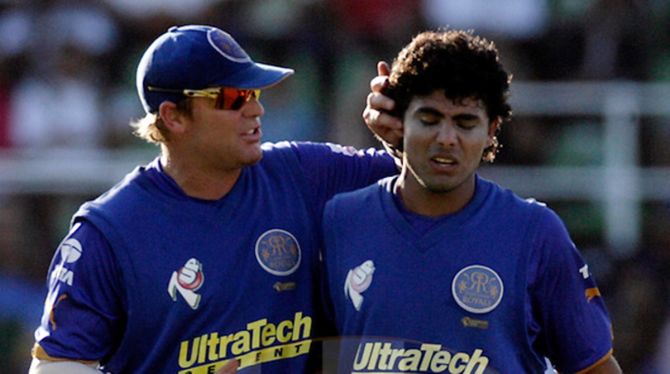 India all-rounder Ravindra Jadeja has expressed gratitude to Shane Warne for giving him the platform to grow in top-level cricket. Jadeja was a part of the victorious Virat Kohli-led India U19 team that won the 2007-08 U19 World Cup in Malaysia. Thereafter, the Rajasthan Royals (RR), led by Warne, roped Jadeja in for the inaugural edition of the Indian Premier League (IPL).

Jadeja had a decent campaign, having scored 135 runs at an average of 19.28 with a top score of an unbeaten 36. He couldn’t pick up a wicket, but the Royals won the tournament after beating the Chennai Super Kings (CSK), led by MS Dhoni, in the final. Jadeja’s career elevated from there on and he is currently one of the most prolific all-rounders in the T20 league.

The 33-year-old cricketer said that it was honour playing alongside a player of Warne’s stature in the cash-rich tournament. Jadeja put forth his opinions on the spin wizard after the second day’s play of India’s ongoing Test against Sri Lanka at the PCA Stadium in Mohali.

“When I first met him in 2008, he was already a legend and I couldn’t believe that I would be playing alongside a player of Shane Warne’s stature,” Jadeja said.

“We were just coming out of our U-19s and to share the dressing room with Warne was a huge thing for youngsters like us. He gave me a huge platform and post U-19, it was a direct entry into the IPL,” he added.

Jadeja top-scored for India in the Mohali Test after the hosts opted to bat first. Batting at No.7, the southpaw stayed unbeaten on 175 off 228 balls with the help of 17 fours and three sixes. On the back of his knock, the home team amassed a massive first innings score of 574/8 declared.

As far as the IPL is concerned, Ravindra Jadeja is presently a fulcrum of the Super Kings setup. Not only does he score useful runs, but also gets crucial wickets in the middle overs. Ahead of the IPL 2022 mega auction that took place on February 12 and 13, the Yellow Army retained Jadeja, along with Dhoni and Moeen Ali.