‘So better play him directly in WC warm up games, Let some frauds get exposed before WC’-Twitter reacts as Suryakumar Yadav reveals that Jasprit Bumrah is fit to play 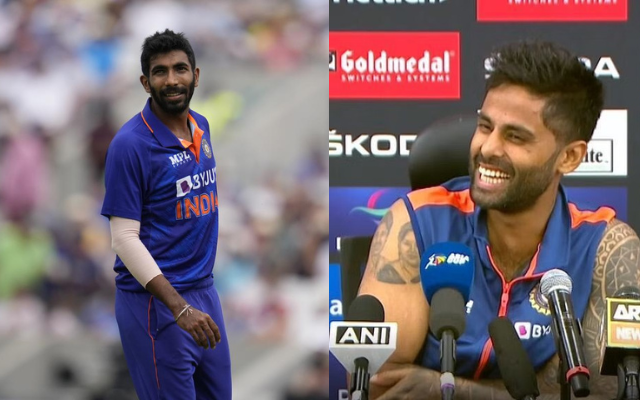 It has been verified by the batter for Team India, Suryakumar Yadav, that there are no worries over the health or fitness of the main bowler Jasprit Bumrah. He gave his word that the fast bowler is completely healthy and that there is no cause for concern in that regard.

After India decided not to play Bumrah in the first Twenty20 International of their three-game series against Australia, which took place on Tuesday in Mohali, many people started asking questions. Due to a back issue, the 28-year-old player was initially ruled out of participation in the Asia Cup.

What did Suryakumar Yadav say about Jasprit Bumrah?

Bowling-wise, India has been suffering greatly without Bumrah as of late, as seen by their inability to defend high totals in recent Twenty20 Internationals (T20Is). During a press conference on Thursday, Suryakumar was asked whether the fast bowler is experiencing any fitness concerns. His response was as follows:

“Everyone is fit and ready to play, including Jasprit Bumrah. (There is) nothing to worry about.”

A victory for India is very necessary for the series against Australia, which will take place on Friday at the Vidarbha Cricket Association Stadium in Nagpur. At the first Twenty20 International match of the series, which took place in Mohali, the bowlers were unable to defend a total of 208. In his four overs, Bhuvneshwar Kumar allowed 52 runs to be scored against him.

They had trouble in the Asia Cup earlier on as well, and in the Super 4 matches against Pakistan and Sri Lanka, respectively, they were unable to defend solid totals of 181 and 173, which were scored against them.

Harshal Patel, like Bhuvneshwar, had a terrible game with the ball at Mohali. Bhuvneshwar was not alone in this regard. He was responsible for the loss of 49 runs in only four overs, the most of which came in the 18th over of Australia’s innings.

If he is fit why he is not playing? Is he any god who can play good on his 1 st day after coming back from injury? Everyone need match practice before playing important matches of World Cup. Don't know what's going on with Indian team but i am not liking it

So better play him directly in WC warm up games. Let some frauds get exposed before WC. No matter if we loose some games.

doing well in resting and he is completely fit to rest

Kyu log Bumrah Bumrah kar rahe hai. It is really bad for us if we can't win games without Bumrah.

India vs England: “Well played Naari Shakti”, Twitter ecstatic as Team India trumps England to clinch a historic ODI series
‘Takes the pitch out of the equation while being impactful in all phases of the game’-Twitter reacts as Haris Rauf clean bowls Philip Salt