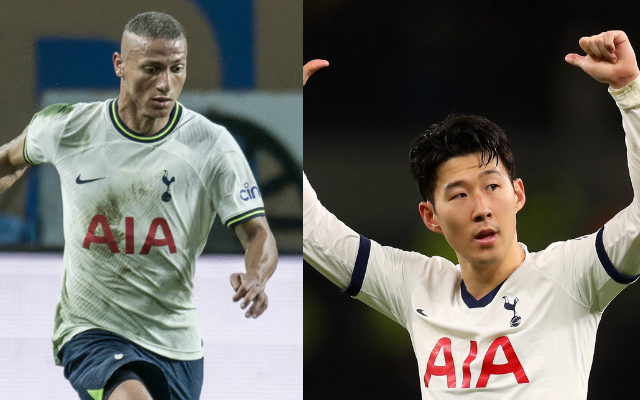 Son Heung-min told Football London that the new Tottenham signing Richarlison has been “unbelievable” in training and that he is looking forward to the challenge that the Brazil international offers in the final third following his transfer from Everton. Richarlison was formerly at Everton.

Richarlison, who is 25 years old, was not present on Saturday when Tottenham defeated Southampton with relative ease by a score of 4-1. Because he was given a retroactive one-match suspension for throwing a flare during Everton’s victory against Chelsea in the previous season.

As a result, he was unable to play for Tottenham in their first encounter of the Premier League season. Nonetheless, his absence was hardly missed. After falling behind 1-0, the Spurs were able to come back and win the game with goals scored by Ryan Sessegnon, Eric Dier, Dejan Kulusevski, and an own goal by Mohammed Salisu.

When asked about the competition this season with Richarlison, who formerly played for Everton and Watford, Son commented on how the Brazilian is impressing a lot of people in training. In addition to that, he said that he is looking forward to the beginning of his rivalry with Richarlison.

What did Son Heung-min say?

“It’s always healthy to have someone to compete with. When I trained with Richy throughout the whole pre-season, he continued to wow me as an incredible player. I am really loving playing alongside him because the competition always makes you better,” Son said.

Even if he does not begin the season in the starting lineup, the acquisition of this player is a huge coup for Tottenham. The Swede set down an early marker to convince Antonio Conte why Kulusevski should start against the Saints by scoring and assisting from the right side.

However, there are a lot of games spread out throughout the season, and the two players will almost certainly switch roles. Richarlison has been doing really well in training, which at the moment is all that is expected of him. It is expected that he will start the game against Chelsea on the bench.

However, he will certainly make his debut in a competitive setting for the North Londoners, but it will be from the bench. When it comes to Son, he may take comfort in the fact that his name is towards the top of the squad sheet. Without a doubt, Richarlison will only begin from the right side of the track.

“Its AMAZING how these guys manage to do this day in and day out!!”, Twitter reacts as Ashton Agar pulls off a scremer on the boundary in the first ODI against England
“Old players are now playing for India A dropping youngsters”, Twitter reacts as Cheteshwar Pujara, Umesh Yadav are set to be part of the India A team for the Bangladesh series