Southampton Vs Newcastle United, Betting Predictions; Where To Watch? 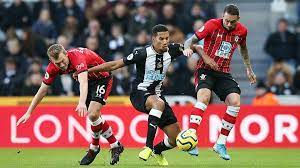 Southampton vs Newcastle United, where to watch?

Southampton centre-back Mohammed Salisu missed the Aston Villa loss due to a tight hamstring and will need to be checked ahead of this match, although fellow defender Lyanco is certainly out for the match. Shane Long and Nathan Tella are both questionable at the time of writing, although Fraser Forster is not in danger of losing his starting position in goal as Alex McCarthy recovers from a thigh injury sustained in training. Despite humiliation against Aston Villa, Hasenhuttl is unlikely to make many changes to the team. However, Kyle Walker-Peters might return at left-back instead of Romain Perraud, while Mohamed Elyounoussi’s position could be threatened by Nathan Redmond and Moussa Djenepo.

As for Newcastle, Isaac Hayden, Jamal Lewis, Kieran Trippier, and Callum Wilson are all out for the foreseeable future, while Matt Ritchie’s return from his knee injury may still be too soon. Howe, on the other hand, has no new issues after the victory against Brighton, and it would not be surprising to see the visiting manager remain with most of the same starting XI if fitness levels let it. Jacob Murphy was replaced by Allan Saint-Maximin in the 64th minute of the last match against Brighton, and that substitute might be used from the start of this match.

Southampton seldom leaves St Mary’s with little to show for their efforts, but Hasenhuttl’s side is under pressure to demonstrate that the humiliating loss to Aston Villa was a one-off.  This will be a tough job against one of the Premier League’s most in-form teams in Newcastle, but we still predict the home side to come away with a point in what could be another exciting game.