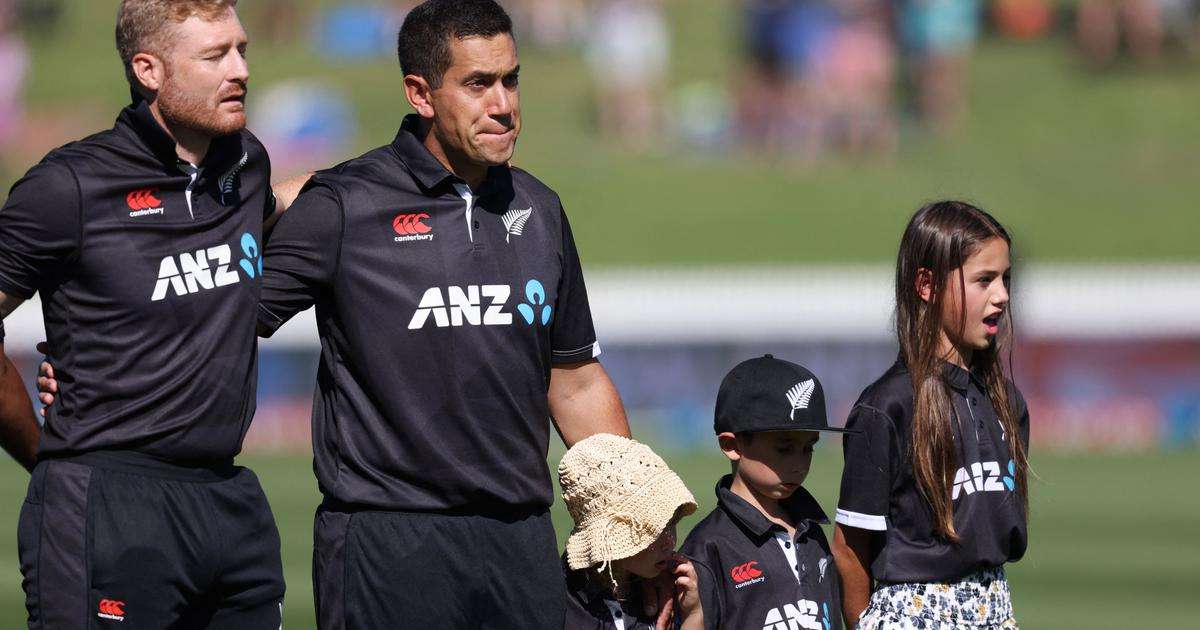 Veteran New Zealand batter Ross Taylor played his last innings for his country on Monday. In the third ODI against the Netherlands at  his home ground Seddon Park in Hamilton, Taylor walked out to bat for the last time.

It was quite a long wait; NZ had batted first and put on a hefty 215 on the board, after centuries from Martin Guptill and Will Young, and Taylor only entered in the 43rd over. He scored 14 from 16 before being caught and bowled by van Beek.

The 38-year-old had played his last Test against South Africa earlier in February. But in the end, he chose to make his final appearance for the BlackCaps in home ground – and it was a teary-eyed, sentimental moment for everyone on the ground. Taylor’s three children, Mackenzie, Jonty and Adelaide stood beside him for the national anthem. He stood with one arm around his longtime teammate and friend Martin Guptill, and the other around his youngest daughter, and blinked back tears.

The crowd at Seddon Park erupted in cheers when Taylor walked out to bat. When he was dismissed, he only gave his trademark, luminous smile. Taylor entered and exited the field through a guard of honour, a heartwarming gesture from the Netherlands players.

‘I played for my country, cool to be remembered for that,’ says emotional Ross Taylor

Speaking to Radio New Zealand, Taylor looks back on his career with no regrets. He said, “For me it was just being a player that tries fight in as many situations as possible, gave it my all, played with a smile on my face and hopefully represented my country proudly and with a lot of respect.”

Ever the team man, Taylor added that his country was always his priority, saying, “That’s always what I wanted to do — play for my country. And hopefully that’s something it’ll be cool to be remembered for.”

This match marked Taylor’s 450th appearance for NZ, after he made his national debut in an ODI in 2006. Since then he has accumulated 7,683 runs from 112 Tests, hitting 19 centuries along the way. He has also been a limited overs mainstay in the NZ team, with 236 ODIs under his belt and 8593 ODI runs. Taylor is currently the only player to have played over a hundred matches across all formats. Across 102 T20Is, he has scored 1909 runs.

‘Every time CSK does badly, Suresh Raina trends on Twitter’ – fans react after CSK’s third defeat in a row
‘Great ambassador of the game’ – Twitter pays tribute to Ross Taylor