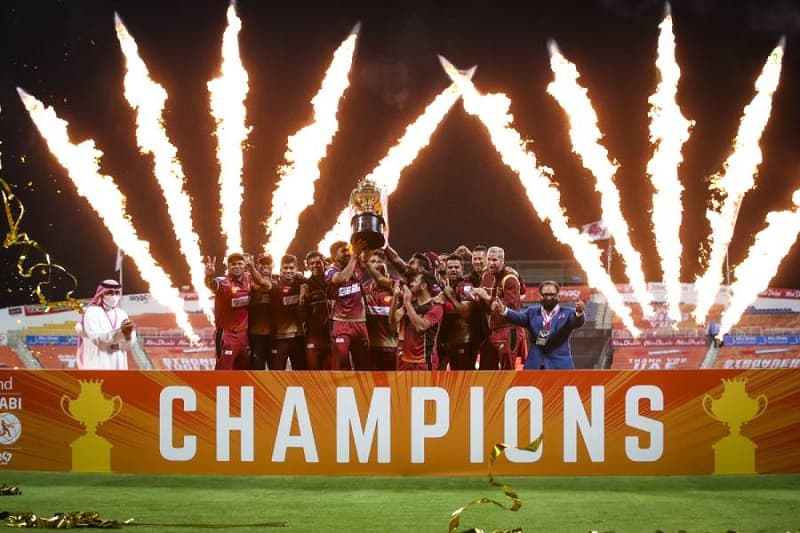 T10 League is a ten-over cricket tournament that consists of 8 participating teams. this year marks the 5th season of the T10 League that is going to be held at Abu Dhabi, at Sheikh Zayed Cricket Stadium. the League is scheduled to begin on 19th November 2021. The Emirates Cricket Board had given a green light for hosting the series.

As we know that the league has successfully concluded four seasons, now it aims at providing the fans a fresh edition, thereby making it all the more thrilling and interesting to watch. The entire League will be telecasted live on different mediums, it will also be streamed digitally online. So take a look at the T10 League Winners List, Runner-Ups, And Prize Money Details.

Since 2017, the inaugural year of the League, the northern warriors have been the most successful team. They had the chance to get their hands on the trophy. They won the t10 league title twice. The Champions of T10 League Season awarded as Trophy and Prize Money of USD 1,00,000. Take a look at the winner’s list and the runners-ups of previous seasons.

The opening season was won by Kerala Kings against Punjabi Legends in the finals of the T10 league 2017. Next Northern Warriors won the 2nd edition against Pakhtoons and then the 2020 edition of the T10 League also.

Here’s the full list of winners, stats, and records from the T10 League:

Total Runs Scored in the Tournament: 6269

Total Wickets Fell in the Tournament: 242

Here are the 8 participating teams of T10 League 2021-22, in Abu Dhabi. The defending champion of the championship is the Northern Warriors. In the initial year, there were only six teams that were participating in the league, later on in 2018, the number of teams was increased by 2 making the total teams 8.

Here are the entire playing squad of all eight teams,