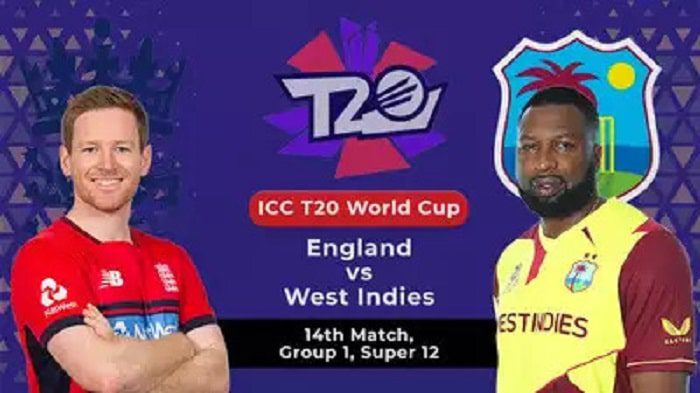 On Saturday, October 23, England and the West Indies will face off in Match No.14 of the T20 World Cup at the Dubai International Stadium in Dubai. 14th Match England vs West Indies Live Score. The Caribbean team enjoyed a good year at home earlier this year, winning six of their ten T20Is against Australia and South Africa. However, Kieron Pollard and his teammates recently suffered defeats in warm-up matches against Pakistan and Afghanistan.

The Three Lions, on the other hand, were defeated by New Zealand after losing to India in their first warm-up game. It’s worth noting that England has never defeated the West Indies in a T20 World Cup match. The last time these two teams faced off in a T20 World Cup match was in the final in 2016. After collecting a massive score, England appeared to be on track to capture their second crown.

Carlos Brathwaite came into the game when West Indies needed 19 runs from the last over. To award his squad the second title, he hammered Ben Stokes for four sixes in a succession.

In the T20 World Cup, England has never beaten the West Indies. They have a better team this time than they had in the past. As a result, their chances of winning this tournament are better.

Dubai had the highest scoring pitches in the Indian Premier League. So far in the qualifying stage, the venue hasn’t hosted any games. As a result, expect a fresh pitch with the potential for massive scores.

On Saturday, the maximum temperature in Dubai will be 36°C. Aside from that, the humidity level would be around 41%.