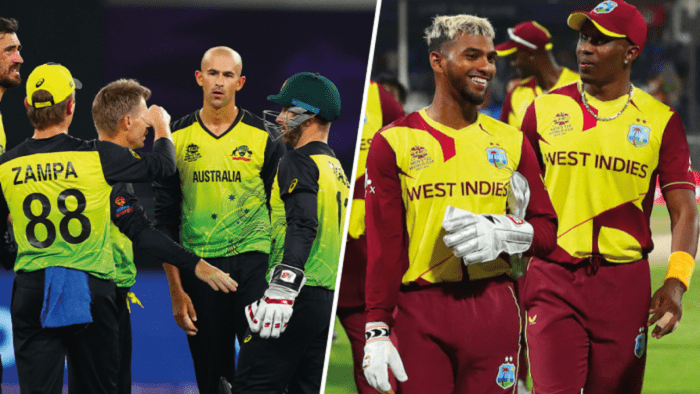 On Saturday, November 6 at the Sheikh Zayed Stadium in Abu Dhabi, Australia and the West Indies will face off in Match No.38 of the ongoing T20 World Cup 2021. 38th Match Australia vs West Indies Live Score. After a 20-run loss against Sri Lanka on Wednesday, the Caribbean team, led by Kieron Pollard, has already been eliminated from the tournament.

In the final Super 12 encounter, Kieran Pollard and his teammates will be competing for nothing but pride. After defeating Bangladesh by eight wickets on Wednesday, the Aaron Finch-led Australians must be bursting with confidence. A win would nearly guarantee them a spot in the tournament’s semi-finals. In their previous ICC T20 World Cup 2021 match, Australia defeated Bangladesh.

Bangladesh, who were batting first in the match, were dealt a major blow when they were all out for just 73 runs. Shamim Hossain led the squad with 19 runs. With 17 runs, Mohammad Naim came in second.

In the ongoing ICC Men’s T20 World Cup 2021, Australia has a stronger record and are favourites to beat the incumbent champion West Indies. The latter team is having a difficult time in the competition.

Prediction: Australia to win this encounter

In the T20 World Cup, the pitch in Abu Dhabi has been fairly favourable for batting. Over the previous few games, the teams have started to put up large numbers. Bowlers, on the other hand, are likely to have a lot of say. For teams, chasing should be the way to go.

The forecast calls for a bright and sunny day with temperatures ranging from 29 to 31 degrees Celsius. On match day, the Abu Dhabi weather forecast predicts scattered clouds, but no rain. We should be able to play the entire match without interruption.