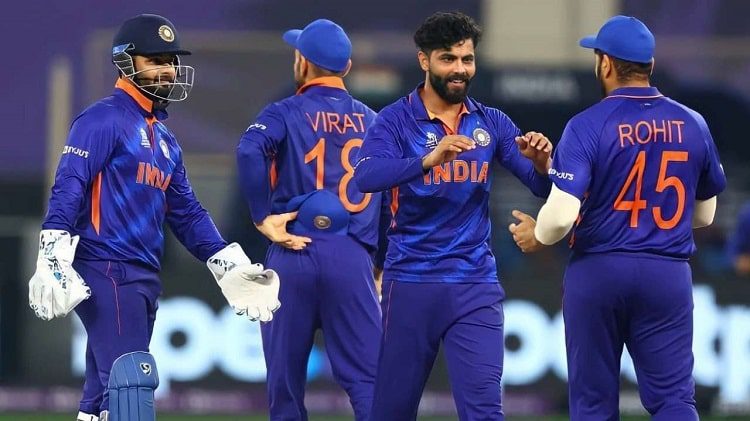 On Monday, November 8, at 7:30 p.m., India will play Namibia in the final league stage match of the ICC T20 World Cup 2021 at the Dubai International Stadium in Dubai (IST). 42nd Match India vs Namibia Live Score. After losing to Pakistan and New Zealand early in the tournament, India rebounded with significant wins over Afghanistan and Scotland to finish strong.

However, with Afghanistan’s loss to New Zealand on Sunday, India is no longer in the running for a place in the semi-finals, with the Kiwis and Pakistan qualifying from Group 2. In four games, India had two wins and two losses. They put in a fantastic all-around performance against Scotland in their last match. India bowled first and dismissed Scotland for 85 runs.

With three wickets each, Mohammed Shami and Ravindra Jadeja were the standout of the bowlers. Two wickets were taken by Jasprit Bumrah, and one by Ravichandran Ashwin.

For the first time since the 2013 edition of the Champions Trophy, Team India has failed to reach the semi-final stage of an ICC event. The Indian think tank is expected to rejig the playing XI for tonight’s encounter against Namibia in Dubai, having already been eliminated from contention for a spot in the semi-finals.

In this match, India will start as favourites to beat Namibia.

India and Namibia are yet to face each other in T20Is.

The pitch in Dubai has been a little challenging, particularly for the team batting first. The chasing teams have had it easy on the track. The team batting second has won 90% of the matches in Dubai during the present World Cup.

The weather of Dubai is forecasted to be clear and it will remain the same throughout the day. There is no sign of rain. The temperature is expected to be 29-Degree Celsius and the humidity to be 55%.