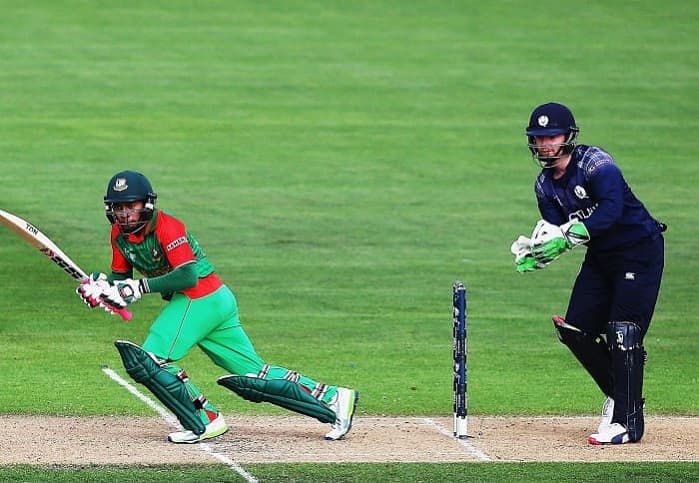 Bangladesh will be facing Scotland for the second match of the ICC T20 World Cup tournament which will be played on Sunday 17 October 2021 at 7:30 PM in Al Amerat Cricket Ground in Oman. Scotland is led by Kyle Coetzer and Bangladesh is led by Mahmud Ullah. Check Bangladesh vs Scotland 2nd Match Prediction- Who Will Win Today’s Match?.

Bangladesh and Scotland are placed in Group B along with Oman and Papua New Guinea and will have to finish in the top 2 so that they can qualify for the Super 12 stage and can continue with their journey.

The Bangladesh men’s national cricket team represents Bangladesh in International Cricket. The team is administered by Bangladesh Cricket Board and is a full member of ICC since 2000. The team is captained by Mahmud Ullah in T20 and Russel Domingo is the current Coach.

The Scotland national cricket team represents the country of Scotland. The team is administered by Cricket Scotland and is an Associate Member with ODI status since 1994. The team is captained by Kyle Coetzer and Coached by Shane Burger.

Bangladesh vs Scotland 2nd Match Prediction And Head to Head

Prediction- Bangladesh will win the match

Bangladesh is the team that never fails to surprise others. The team had upset many teams by knocking them out of the tournament. Before the start of the tournament, they won the series against New Zealand and Australia. Both are one of the strongest teams in the cricketing world.

Scotland has won 3 out 5 previous matches they played. The wins are against smaller teams and can struggle against Bangladesh who recently has won series against giants.

Bangladesh vs Scotland Head to Head

The Al Amerat Cricket Ground Oman Cricket (Ministry Turf 1) pitch is a well-balanced surface. In the last five meetings at this site, the average first innings score has been 167 runs. The location is suitable for both Pacers and Spinners.