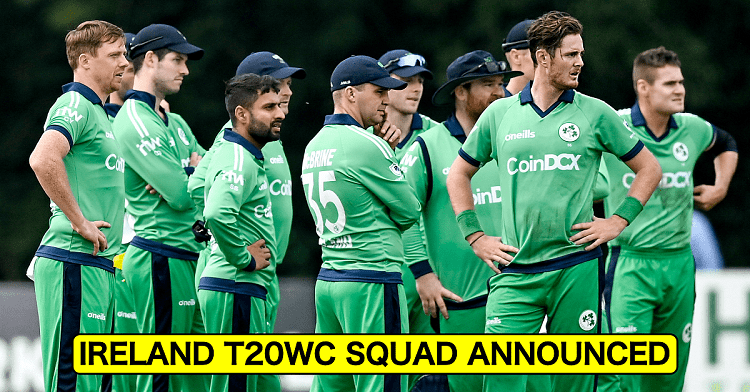 With the most awaited cricket League ICC T20 Word Cup kicking off from 17th October 2021, fans are very excited to watch their favorite players on the field. This years marks the seventh edition of ICC T20 League, with multiple issues that rose in the past, finally all is set to roll in UAE and Oman. T20 World Cup Ireland Squad 2021.

Ireland is one of the 16 participating nations of the ICC T20 World Cup that will battle is out through the finals. All 45 matches will be held in 4 different locations that is Dubai, Sharjah, Abu Dhabi and Muscat. So take a look at the Ireland Squad For T20 World Cup, Complete Players List, Owner, Captain, Stadium, And Fixtures.

Ireland has finalized its playing squad for T20 world cup this year. They are named as the Men in Green because of their home color code.

Who is the Owner and Captain of the team Ireland 2021?

The national cricket team of Ireland is managed and governed by the Cricket Ireland, which was formerly known as Irish Cricket Union. The association was formed in the year 1923. The chairman of the association is Ross McCallum.

The team is entrusted with the captaincy of the Irish professional Cricket player, Andrew Balbirnie. He featured in Ireland’s first ever test match in 2018 against Pakistan and also in 2019 was given the contract by Cricket Ireland for playing in the 19 member squad.

The Whole squad of Ireland plays and practices cricket in the home stadium, Malahide Cricket Club Ground. It was first established in the year 2013 and also contains the capacity of 11,500 this making it Ireland’s biggest stadium.

The fixture of the Ireland playing in ICC has been announced. Here is a table provided to you that will help you to get details of the upcoming matches that Ireland will be playing.

The schedule of ICC T20 World Cup has been provided to you beneath, check out the details of the match and mark the dates of your favorite teams.