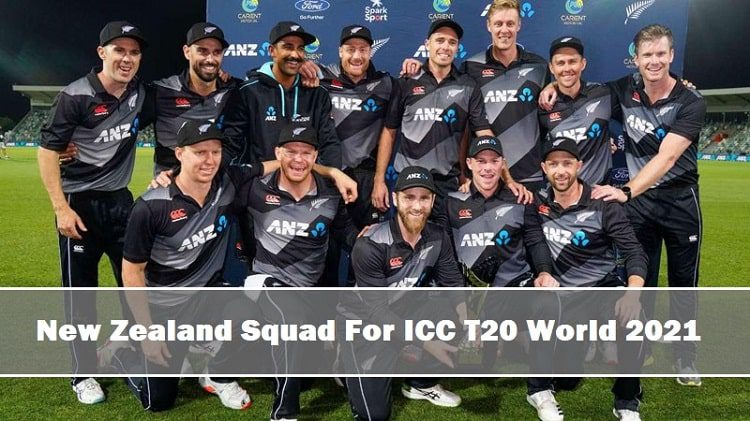 The final announcement for ICC T20 World Cup 2021 which is all set to roll from 17th October 2021. The entire series will be hosted by two nations jointly, Oman and UAE. Initially is was scheduled to be hosted in India, but as we all know, the government in the month of April announced complete lock down due to the rising cases of Covid-19 in the country. Check out T20 World Cup New Zealand Squad 2021.

With a 16 Participating nations will compete through the finals on 14th of November. Fans and Cricket lovers can enjoy watching the live stream of the entire series on their TV sets and other devices. So take a look at New Zealand 2021 Squad For T20 World Cup, Complete Players List, Owner, Captain, Stadium, And Fixtures.

New Zealand has players who not only appear to be strong and fiery but they showcase the same energy on the field. Here in the entire list of players that will be featuring in the upcoming ICC T20 Worl Cup 2021.

Who is the Owner and Captain of New Zealand Cricket team?

The team of New Zealand is led by the captaincy of Kane Stuart Williamson. He is a right handed batsman and an occasional off spinner. He played his first test match against India in 2021. He also plays for the team Sunrisers Hyderabad in IPL.

Eden Park is the sports stadium where New Zealand cricket team plays most of its matches. It was established in the year 1900. It has the capacity of 42000.

The fixture for New Zealand cricket team in ICC T20 World Cup is provided to you below. Check it out here,

What is the Schedule of ICC T20 World Cup?

The schedule for ICC T20 World Cup is officially announced. The first match will be taken place at Al Almerat, Muscat on 17th October 2021. The time of the match mentioned is according to Indian Standard Time. The entire series will conclude on 14th November, after a month, with the finals. So take a look the table below and check out the details of each match game.