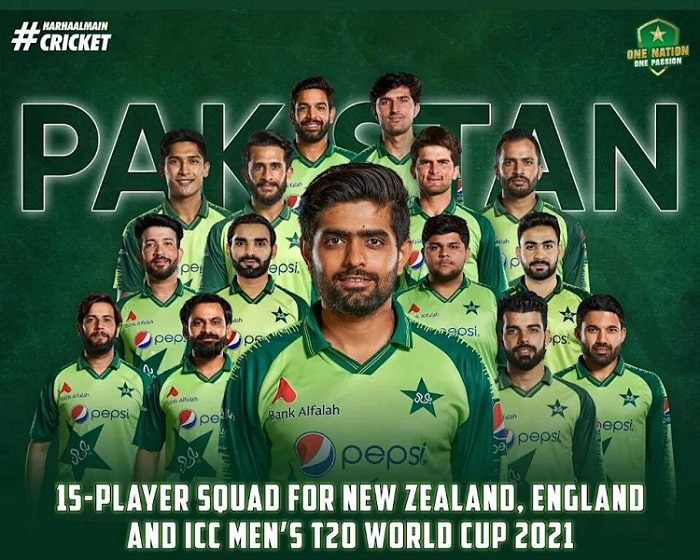 ICC T20 World Cup for the year 2021 is finally going to begin from 17th October 2021. After 5 years and multiple issues arising, this year the entire series will be held in UAE and Oman. Initially is was scheduled to be hosted in India, but as we all know, the government in the month of April announced a complete lockdown due to the rising cases of covid-19 in the country. T20 World Cup Pakistan Squad 2021.

Pakistan has been a member of the ICC since 1952. A total of 16 Participating nations will battle it out through the finals. Fans and Cricket lovers can enjoy watching the live stream of the entire series on their TV sets and other devices. So take a look at Pakistan 2021 Squad For T20 World Cup, Complete Players List, Owner, Captain, Stadium, And Fixtures.

The official news of the entire squad of Pakistan playing in the upcoming T20 World Cup is announced by the governing body of the Pakistan Cricket team. A total of 15 players will be performing as a part of the Pakistan cricket team. Take a look at the squad,

Who is the Owner and Captain of Pakistan Cricket 2021?

The team is led by the Captaincy of Babar Azam. It is regarded as the world’s best contemporary batsman. He also received the number 1 position in 2021 at the ICC ranking for ODI batsman.

Pakistan Cricket team plays most of its matches and practices at the Gaddafi Stadium. It was formerly known as the Lahore Stadium. The Cricket Board of Pakistan is situated here. It has a capacity of 27000 and has been affiliated as an ICC member since 1952.

The entire fixture of the team Pakistan playing at the ICC World Cup 2021 is given below, take a look at it.

Here is an entire fixture of the most awaited Cricket tournament held in UAE and Oman, ICC T20 World Cup 2021. All timings mentioned below in the table is according to Indian Standard Time.