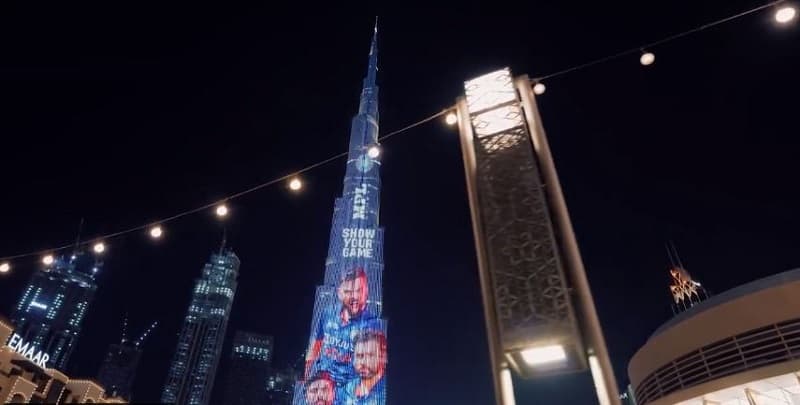 As every cricket is eagerly waiting for October 17th, 2021 when the first match of ICC T20 World Cup for the year will commence. Many have also glued their eyes to social media regarding any updates and news by the officials. Here we will let you know every detail and minute changes that take place in the teams.

There are going to be a total of 45 matches played in a time span of 4 weeks, which will determine the winner of the ICC T20 World Cup for this season. Here is the latest news regarding the same, check out the T20 World Cup: Team India’s new jersey displayed at Burj Khalifa.

MPL is the official Kit sponsor for team India n the T20 World Cup 2021. They have showcased a phenomenal event for the fans to take a look at their jersey which will be worn by the players of the Indian Cricket Team. Everyone was mesmerized by the event that was held in Dubai, the host nation of ICC this year.

It was one amazing night to remember for all cricket fans. This was for the first time that Burj Khalifa was brightly lit with the Jersey of the Indian team. The jersey represented the hashtag, Billion Cheers Jersey, which literally means the cheers of Indian cricket fans. This is an ode to their unwavering support over the years.

The Team India World Cup jersey unveil gets bigger and better with a projection on the iconic Burj Khalifa.

The Indian Cricket Team will be showcasing its form for the ICC T20 World Cup 2021, on 24th October 2021. against arch-rivals Pakistan. The men in blue will face the Paks at the Dubai International Stadium.

Team India also tweeted on their social media saying,” Are you Ready to #Showyourgame and back to Team India?” Which was given a lot of love and affection by the fans. It was quite exciting for everyone to witness this extremely scintillating event that was organized by the makers of ICC for team India.