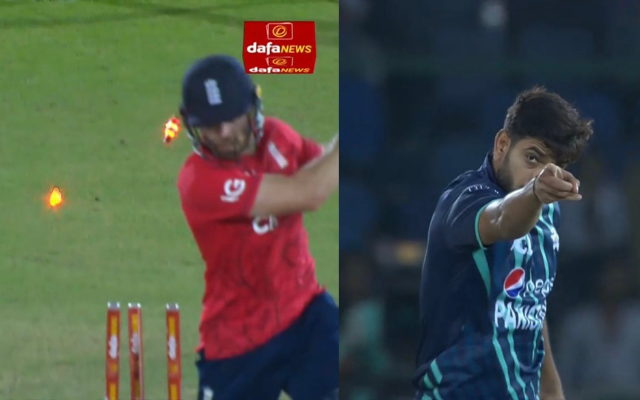 Moeen Ali, who was serving as England’s temporary captain at the time of the match, won the toss and elected to bat first. Alex Hales and Philips Salt got off to a rousing start, but then Shahnawaz Dahani removed both Alex Hales (26) and Dawid Malan from the game (0).

Both Philip Salt and Ben Duckett provided assistance to England when it was needed. As a result of their 53-run partnership for the third wicket, the two players were able to take the game away from the rival team.

In the meantime, Haris Rauf made a significant contribution by causing a commotion among Salt’s stumps. After scoring 30 runs off of 27 balls, Philip Salt made his way back to the dugout. He finished with one four and one six to his credit.

To say that Pakistan’s bowling efforts are good is an understatement, particularly in light of the fact that they lost the first T20I match. The will try to stop England on a low score and then chase it down.

Haris Rauf has been the best pacer in this entire tournament. Not bad for a “tape ball” bowler. Only reason he gets hate is because he plays at the highest level despite breaking every single norm in a country and sport that refuses to free itself from the shackles of tradition.

It looks like Haris Rauf is bowling on a pitch different than Naseem Shah and Shahnawaz Dahani. That's experience for you! Plus, Haris has improved a lot this year.

The more you play, the more you learn. Just use this experience as a learning curve.#PAKvENG

Haris Rauf is the best T20 pacer in the world. Takes the pitch out of the equation while being impactful in all phases of the game including the most unforgiving ones.

On a side note, Haris Rauf has risen to the top as a proper spearhead in Shaheen's absence. One of the most unfairly criticized players, playing possibly the toughest role in the bowling attack. Not only is he our best death bowler, he has also improved his new ball bowling.

"you need a wicket, you go to HARIS RAUF" pic.twitter.com/mQpgXNEqLs

SOMEONE GIVE HARIS RAUF A HUG pic.twitter.com/VuwVjoAjPQ

IM SORRY TO BE A SIMP ON MAIN BUT HARIS THIS WAS HOT pic.twitter.com/o2gyEbKknT

What a skill to master on within a year. HARIS RAUF STAN ❤️ pic.twitter.com/OUSqb6xcLu

‘So better play him directly in WC warm up games, Let some frauds get exposed before WC’-Twitter reacts as Suryakumar Yadav reveals that Jasprit Bumrah is fit to play
“He is already this good”, Twitter goes gaga as Dewald Brevis smokes 30 off 6 balls