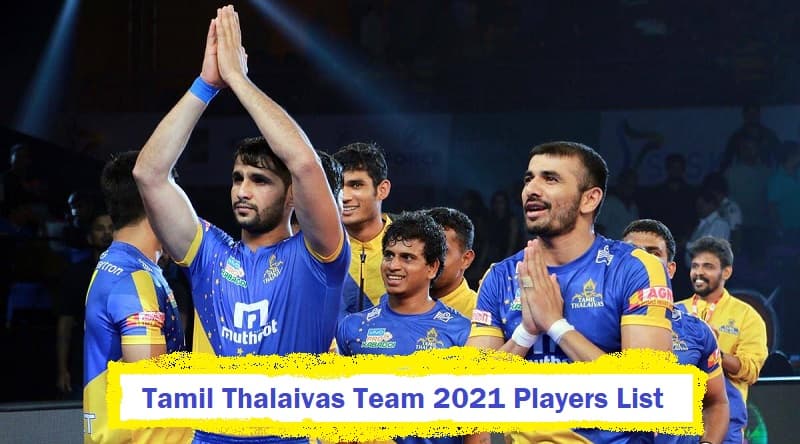 Kabaddi is a sport that is played in rural parts of India. Later, in 2014 it was launched at a professional level named as Pro Kabaddi League. Check Tamil Thalaivas Team 2021 Players List, Owner, Captain, Stadium, Fixtures.

The 12 teams play each year in the League and battle through victory. The game follows the same rules as kabaddi with a few additions. Pro Kabaddi had 7 enthusiastic seasons, and fans are expecting the same this year. Check

Tamil Thalaivas is one of the franchise teams that participate in the annual Pro Kabaddi League. The team is based in the state, Tamil Nadu. The team was established in the year 2017, after the inaugural season of PKL, in 2014. So take a look at the details of the team like Squad, Tamil thalaivas retained players 2021, Owner, Captain, Stadium, And Fixtures.

Tamil Thalaivas is a hard-working team of the League. Just like the other teams, they believe in team spirit. The entire team is not only strong but also sharp with their skills. Players like Ajay Thakur who is quick with his reflexes will be playing for the team.

So take a look at the Players List and the position these players of Tamil Thalaivas will be playing for.

Tamil Thalaivas 2021 Who is Owner and Captain ?

Magnum Sports Ventures Pvt Ltd. is the owner of Tamil Thalaivas. Uday Kumar is the head coach of Tamil Thalaivas. Actor Vijay Sethupathi is the brand ambassador of the team. The Team is led by the captaincy of Ajay Thakur. He is a very well-skilled Raider. He has consistently been among the leading raiders of VIVO Pro Kabaddi since its inception.

The team is also coached by Udaya Kumar. The team’s Home colors are shades of blue. Dark blue and Sky Blue, are the color codes of Jersey for this team.

Thalaivas had their first season in the year 2017. The team hasn’t had a chance to get their hands on the trophy yet. However, the team had a difficult season in 2019. It Won a total of 66 matches in 3 seasons which is fairly below average as compared to other teams.

So, take a look at the entire stat table that showcases the gameplay over a year with the team Thalaivas.