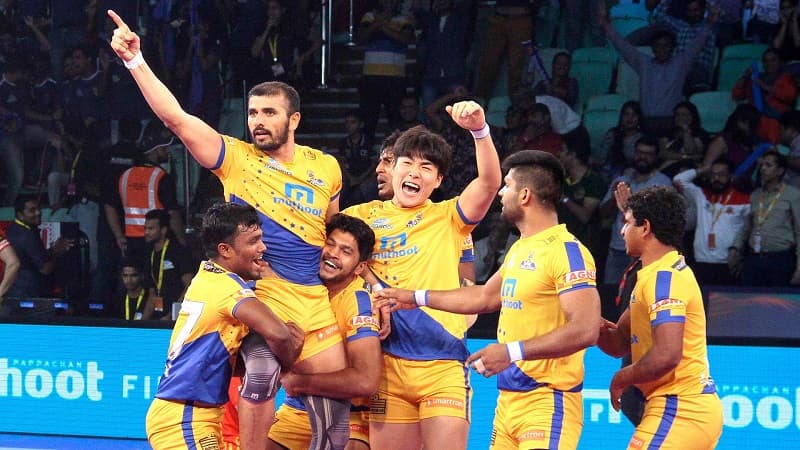 Kabaddi is a sport that is played in rural parts of India. Later, in 2014 it was launched at a professional level named as Pro Kabaddi League. Check Telugu Titans Team 2021 Players List, Owner, Captain, Stadium, Fixtures.

Telugu Titans is a franchise team to represent the city of Hyderabad in the Pro Kabbadi League every year. The team was established in the year 2014, in the inaugural season of PKL. The team is the best performing team of PKl. So, take a look at the Squad, Telugu titans retained players 2021, Owner, Captain, Stadium, And Fixtures.

Telugu Titans are the best performing team in PKL. The reason they are unmatched by the other teams is in the team spirit. The entire team is not only strong but also sharp with their skills. However, the team never had a trophy in their hands. The team has strong contenders who are physically active. Take a look at the team squad,

Telugu Titans 2021 Who is the Owner and Captain ?

Telugu Titans is a franchise of Veera Sports owned by Mr. Srinivas Sreeramaneni of Vaya Group, Mr. Goutham Reddy Nedurmalli of NED Group, and Mr. Mahesh Kolli of Greenko Group. The team is lead by the captaincy of Abozar Mohajermighani. He is from Iran, Persia. He had led the team in the year 2019.

Since the team is based in Hyderabad, Telugu Titans play all its home matches in G. M. C. Balayogi SATS Indoor Stadium, Hyderabad. It holds a capacity of nearly 5000 people. It was established in the year 2002. Apart from this it also has its home ground in Vizag.

The team has 126 matches played in overall seasons. they won 51 matches in 7 seasons. the team had fairly good gameplay in season 2 with 9 matches won. The last season was unfavorable for Titans. So take a look at the stats of the team over the years.