The most legendary cricketers of all time 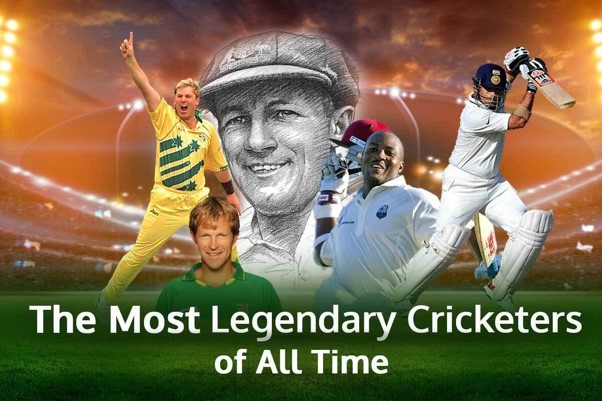 Cricket has evolved to be everybody’s favorite game over the years. Cricket fans are equally enthusiastic about the game just like the actual players and regularly keep their eyes on the calendar for what new event is to come up.

Lately, due to the pandemic, people have focused largely on mobile video games as real sporting events were shut down due to social distancing. This introduced fantasy cricket games into the lives of these fans as they were the only way these players could connect and have a slice of the real game in the digital format. To play fantasy cricket online, if you haven’t already, all you have to do is install the game on a compatible device, and the instructions will guide you through the whole aspect of the game. It is insanely fun and easy to play, even for people who are not die-hard fans of cricket.

Now that real games are returning and the World Cup is just around the corner; let’s remember some of the greatest names that have graced the golden 22 yards of the field.

The only name known by people outside the sporting fandom is Sir Donald Bradman. His batting average of 99.94 has been marked as the top achievement accomplished by anyone in any sport. Bradman is the stuff of legends and has ascended to the folklore category with his insurmountable feats and achievements. The Australian invented his style of playing drives and cuts that no other batsman had done before. Also, Donald is the first cricketer who has been knighted, which undoubtedly gives him the top spot on the list.

Tendulkar claims the title of the most prominent cricket figure in the last 50 years. Sachin has become the most celebrated cricket champion from the Indian subcontinent with incredulous feats achieved by him for the national team of India. At the start of the 90s, Sachin displayed extreme composure and playing style, winning the Arjuna Award in 1994. In the following years, he was awarded the Khel Ratna award, which is won by the most outstanding players in any game. Later at the start of the 2000s, he rose to his prime winning Padma Shri and Padma Vibhushan award in 2008. The last feather in his cap was the World Cup, which he won after playing in six tournaments.

The legendary captain of the Pakistan cricket team pushed the team to victory in 1992. Not only a cricketer but a man of fashion, Khan redefined glamor and cricket on self-made terms. Overnight Imran became a celebrity in England and Pakistan and often frequented London nightclubs after delivering games of good cricket in the matches. He has talent in all aspects of the cricketing field and is a renowned allrounder with unique bowling and batting talents. Due to his exceptional talent in fielding and unforgettable character, he was chosen as the captain of the national cricket team of Pakistan. Imran’s legacy continues after he retired from International Cricket in 1992 as he became a full-time philanthropist serving even greater causes with his earned stardom.

If anyone clearly defines what it means to be the perfect cricket player, then it is Brian Lara. He is the ideal dream player in the game and the only cricketer in history to have scored 400 runs in one test innings. Brian became so quickly proficient in the game that he still holds the record of scoring a century against all world nations that play cricket. The star who hails from the Caribbean also has to his name the highest first-class score of 501. With this performance, Brian demolished Durham while playing with Warwickshire in 1994. Today’s coaches still narrate his legacies to keep youngsters inspired to achieve greater feats in cricket.

Jonty Rhodes is regarded as one of the greatest of all time owing to his commitment to the fielding segment of the cricket game. Now the world is yet to see another player as important as Jonty Rhodes, whose fielding could be the same caliber as him. Jonty began his career slowly, was not the best player, and lacked any skill with the bat. Over the years, Jonty realized that he had to become a batsman if he intended to outperform his peers. With practice, Jonty became a well-to-do batsman, and throughout his career, he maintained an average of 50 in Tests till his retirement. His electric fielding always made Jonty stand out in the matches and kept him going as a top contender in the roster till very late in his career.

No list of legendary cricketers can be complete without Shane Warne. Most of his contemporaries rightly called Shane the ‘King of Spin,’ unfortunately, the star passed away this year in March. In 1993, Shane Warne created history by being the only spinner to pick up 71 wickets. Warne also helped the national team grab their 2nd world cup win, where he took 20 wickets in total and planned how the team should put itself forward to win the upcoming matches. During the end of his career, Shane received huge accolades from his teammates and peers. His recent passing has only elevated his position in cricket and made him a real hero.

These legends made themselves what they are through sheer hard work and capability. They are a remarkable example of what future generations should strive for if they choose to take on the role of an athlete. The names on this list not only count as incredible cricketers but as the most famous athletes that defined and redefined themselves over the years in their area of expertise and demand to be celebrated in future times for their contributions to the game of cricket.