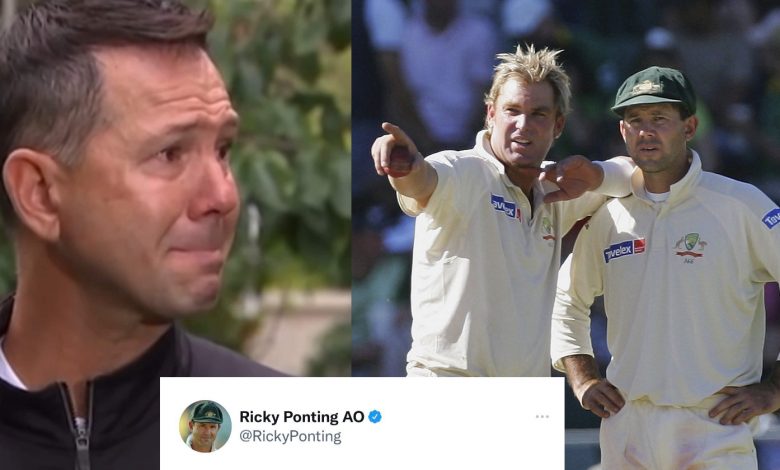 During his homage to former teammate and friend Shane Warne, former Australian captain Ricky Ponting broke down in tears. Shane Warne died suddenly on March 4th after suffering a heart attack. Ponting was noticeably upset and found it difficult to maintain his composure for having been a close friend and colleague of the legendary cricketer for more than two decades.

When asked about the cricketer’s premature death, Ponting said that he was in a state of shock after learning of the awful news. He went on to say that it would take time for him to process what had happened since it did not seem real to him at the time because of the unexpected nature of the loss. Also mentioned was how the 47-year-old was taking his time to digest all of the memories he had with Shane Warne.

“I was taken aback, and I believe the rest of the world was as well. I mean, I received the texts when I woke up this morning. I went to bed last night knowing that I had to take my daughters to netball, and then I was confronted with something that didn’t seem quite real at the time and probably still doesn’t seem quite real either, so I’ve had a few hours now to digest it all and think about how much a part of my life he was, and reflect on a lot of those memories throughout the years,” Ricky Ponting said as quoted by Hindustan Times.

Ricky Ponting has lauded Shane Warne as “one of the greatest cricketers of all time.”

For Warne, Ponting saved the highest of compliments, describing the renowned cricketer as “one of the all-time greats.” He referred to the leg spinner as the most competitive bowler in the game, and he spoke about how the leg spinner was reinventing the art of spin bowling. Shane Warne played under Ponting for the better part of his international playing career, and the two had brought numerous honours to Australia throughout their respective playing careers.

When the news of the death of the Melbourne-born player initially emerged, the cricketing world was taken by surprise. Many former and present cricketers have expressed their shock and grief in the wake of this news. Several tributes have been coming in for one of Australia’s finest sportsmen from different cricketing sectors throughout the world, and it is expected to continue.

Shane Warne gave me a huge platform in IPL 2008: Ravindra Jadeja
‘I Did Not Contribute’- Ben Stokes Dissapointed With His Individual Performance Down Under