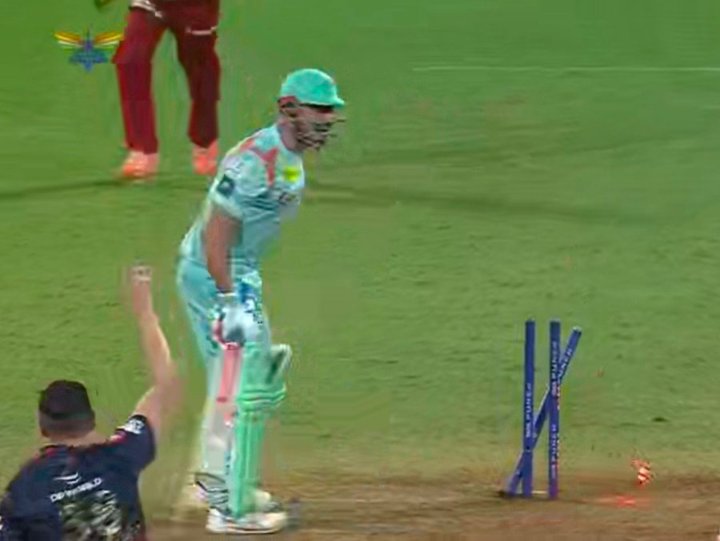 Royal Challengers Bangalore defeated Lucknow Super Giants by 18 runs on Tuesday (April 19) after setting them a target of 181. Marcus Stoinis was batting well going into the 19th over, but he was bowled by Josh Hazlewood after a controversial wide call. The Australian was furious, letting loose a choice expletive before stomping off the field.

At the start of the penultimate over, LSG were six wickets down with 34 runs still needed, Stoinis and Jason Holder at the crease. Stoinis was on strike, and had scored 24 off 13 balls after smashing two fours and a six. The two were LSG’s last recognised batting pair, and it was a tough, tough ask even for finishers as powerful as them.

The first ball of the 19th over, bowled by Hazlewood was pitched full and very, very wide outside off. Stoinis shuffled across the crease, but still couldn’t get close to it, and shockingly the umpire Chris Gaffaney did not call a wide. Both batters, especially Stoinis were perplexed and conferred for a minute before facing the next delivery. Their target now read 34 from 11.

The next delivery was similar, and this time Stoinis did get bat on it – an inside edge back onto the stumps. The Australian couldn’t believe it, and swore loudly, turning back an instant to meet the umpire’s eye before swinging his bat in frustration and trudging back inside. The two words were clearly audible on the stump mic, distinct, clear as day and even louder than the RCB team’s celebration.

The match had slipped completely beyond LSG’s control at that point. Jason Holder hit a couple of sixes, but it was not nearly enough. Krunal Pandya top scored for LSG with 42 off 28 balls, hitting five fours and two sixes along the way, but none of the other batters gave him company long enough for it to make a difference. Deepak Hooda and Ayush Badoni fell for 13 runs each, and skipper KL Rahul couldn’t convert his fluent 30(24) into a big score.

Twitter users who shocked by the umpiring howler, and many were of the opinion that it cost LSG the match.

Due respect to Hazlewood who is fantastic, the umpire has bowled Stoinis here, this is so so poor.

The poor call by umpire of not giving a wide played a part in that Stoinis dismissal.

That was a very big wide.

Stoinis screaming fuck off in the stump cam lol, that was a massive wide tbf terrible umpiring

Even if that was a wide. Stoinis may still have got out. Don't link two things, Stoinis' frustration after getting out with Stoinis getting out just because umpire didn't give that wide. #IPL2022

Also, Stoinis was hard done on that wide call. Most umpires give it a wide.

I have always felt these wide calls cannot be subjective. Can be disastrous in such circumstances as it proved to be for Stoinis and Lucknow. It actually killed the game.

Nonsense Fair Play award. Stoinis should be allowed to vent. That ball was wide by a mile. Athletes compete, it's brutal, let them be. #RCBvLSG

‘Faf du Plessis has done this many, many times’ – Twitter impressed by RCB skipper’s 96
‘Shahrukh making sure PBKS never bids for him again’ – Twitter after PBKS score lowest total of IPL 2022