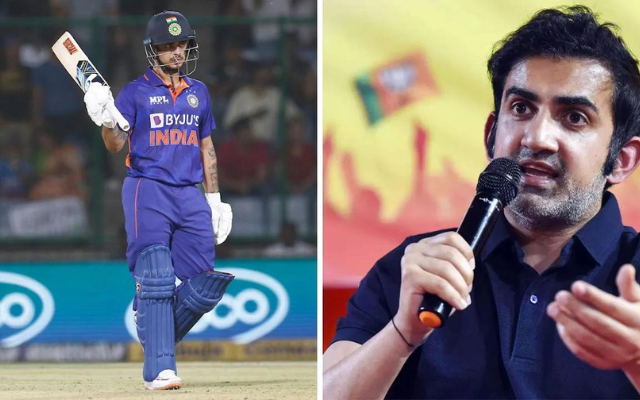 One of the most important goals for India in the Twenty20 International series against South Africa has been to demonstrate their intent during the powerplay. This is a factor that has hampered the Men in Blue on numerous occasions in the past, particularly when they have been the team to bat first in a match. But one batsman has established the groundwork for India’s courageous approach against the new ball, and veteran Indian cricketer Gautam Gambhir has been effusive in his admiration for the kid as he has endorsed him for the Twenty20 World Cup as well.

Ishan Kishan had, up to this point, amassed 55 runs during the powerplay over the course of two innings, which corresponds to a strike rate of 134.1 and a pace of approximately 4 balls per boundary. Ishan has already established his value as a brave hitter at the top of the order in Twenty20 Internationals, which is a position that India has been searching for for a long time.

What did Gautam Gambhir say about Ishan Kishan?

“The issue that has to be answered is whether or not the Indian squad will continue to use KL Rahul, Rohit Sharma, and Virat Kohli after they return. Simply because you consistently mention the x-factor and the need of having a bold attitude. This fearless mentality is what he brings to the game, regardless of whether he scores runs or not. Will they resist the urge to open the batting with him and Rohit while promoting KL Rahul to the middle order? However, in Australian circumstances, where there will be bouncy wickets, where he likes to pull from the backfoot, and where he smashes the length ball really effectively, I would want to stick with him. My opinion is that they should continue to rely on him for this Twenty20 World Cup. If he is in the scheme of things, they play him till the World Cup,” Gambhir said.

While Kohli and Rohit have both been given time off for the series against South Africa, Rahul’s injury precludes him from participating in the competition.

‘We Will Get A Great Deal Of Knowledge’- Nicholas Pooran Reflects On The 3-0 Loss In The Pakistan Series
IPL media rights auction: Disney Star retains TV rights, digital package bagged by Viacom18